"Most men would have been terrified, hanging upside down with nothing but a thin silk rope between them and a gory death on the marble floor forty feet below, but Valya was not a man. She was a young woman of barely eighteen winters, little more than five feet tall and born of noble blood.

She did not even break a sweat.

Did stablehands shake with terror when they groomed their horses? Did blacksmiths live in fear of their forges and anvils? No, they did not. Through this knowledge Valya had long since deduced that if they did not fear their vocations, then she would not fear hers."


- from "In the Shadow of the Wasp," an anthology containing the tale "Valya's Story" 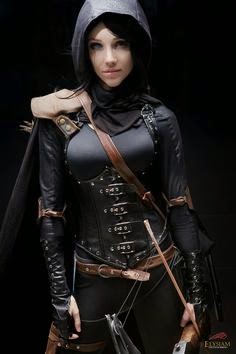 Valya comes from the same series of stories about hopeless love as Rigel (the story that made my wife fall in love with me). She was a noble woman who fell in love with a man her family did not approve of, and so they had him conscripted into the army and sent him off to his death. She rebelled and fled her pampered life to become a highly skilled and motivated thief and rogue who terrorized the nobility by stealing or destroying that which mattered most to them more than the happiness of their own children - their riches.

The four stories that comprised "In the Shadow of the Wasp" are kinda the Silmarillion to my fantasy world. Not to compare myself to Tolkien by any stretch of the imagination (though I kinda did that once), I just mean that those stories introduced a ton of ideas, elements, themes and characters that keep creeping into my stories and games twenty years later. The epic fantasy novel sitting in The Closet that I mentioned earlier this month is set in the same world, though many generations after the reign of the King of Wasps, and that novel has at least two sequels sitting in my head (I think I said last week there's a potential 7 books altogether). Of course it's also the world where many of my Dungeons & Dragons-style role playing games are set, and there's even a chance that the stories started as a D&D session - I don't remember anymore, they were developed pretty closely hand-in-hand.

So anyway, because I don't think I'll use the characters from the other two stories in this month's edition, I'll give you a bonus today and reveal them to you:

Lord Paice - You met him briefly yesterday. An older man, one of the greatest heroes and defenders against the King of the Wasps. When his daughter is killed by his greatest rival, one of the King's most trusted lieutenants, Paice goes on a one-man suicide mission to avenge his death. On his ways he meets a young woman and her family that gives him another reason to keep living.

Theodore - A bit of a schmuck and a hopeless romantic, he worked backstage at the theatre in the House of the Ruby Rose, a sort of temple/gambling house/high-end brothel deep in the Wasp King's domain. He falls madly in love with an actress and pines for her from the wings every night. Somehow his wildly flowing emotions unlocks an natural affinity for magic, but he has no training in the art and cannot control it. One night when the temple is attacked by the Wasp King's forces  Theodore uses his dangerous gift to try and save the woman's life, even if it may cost him his own...


So that's why I changed the name of "In the Shadow of the Wasp" to hopeless love, because all the stories were tales of people doing really dumb things for love...
Posted by C.D. Gallant-King at 5:30 AM
Email ThisBlogThis!Share to TwitterShare to FacebookShare to Pinterest
Labels: A-to-Z Challenge 2015, Dungeons & Dragons, Gate and Necromancer, King of Wasps, LotR, Rigel, Roleplaying Games, The Hobbit, Ulric, Writing