Note: The 2020 St. John's Regatta has been cancelled due to COVID.

It's a pretty exciting time! The release day for PSYCHO HOSE BEAST FROM OUTER SPACE is rapidly approaching. Advanced reviews are already starting to come in, and so far they've been pretty positive. I've changed up the cover for something a little less cheesy, and final edits are nearly complete. Hell, I've been doing so well that I'm even working on several short stories that I hope to get submitted before the end of the month.

So what do I have to complain about? To be insecure about?

Well, there's always fear that the book won't ultimately be received, or that I won't be able to finish the next book, and so on and so forth. But to be honest, the reason I've been keeping so busy with book-related tasks is because I'm more worried about real life.

School is supposed to start in September. Here in Ontario, the government has declared that all schools will re-open, with virtually no changes or additional safety precautions in place, especially at lower grades. Which includes my kids. Canada has been pretty good at keeping the virus in check, but with kids going back full-time in crowded classrooms, I can't see that track record staying intact.

I cannot, in good conscience, send my kids back to that. My wife, son and father-in-law all have health concerns that would be seriously, potentially fatally, complicated by catching the virus. Fortunately I'm in a position where I can keep my kids home, at least for now, but that has its own complications. My kids will miss out on social interaction, which will assuredly affect their mental health. My own work and my wife's health suffers from having the kids home 24/7. Plus there's the uncertainty of not knowing when they might eventually go back, or what it will look like.

Maybe I'm overreacting. Maybe school will re-open and everything will be fine (though I doubt it), and in a month or two my kids can go back and things will get back to normal. That seems like a pipe dream, so for now I just have to be cautious and do what I think is best.

In the meantime, all I can do is focus on the things I can control, and try to have fun with my book launch and make it the best it can be!

How's your month been? 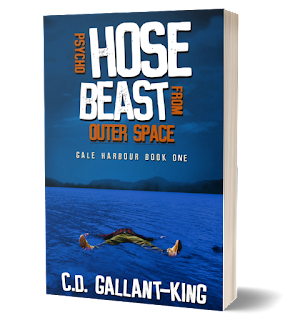 "Typical Gallant-King - gutsy, original, and savagely fun."
-Samuel Gately, author of Night of the Chalk and The Fire Eye Refugee

"C.D. Gallant-King pays an exciting and thrilling homage to the 90s. The story is expertly paced and an excellently crafted sci-fi."
-Paul Carberry, author of Zombies on the Rock

"The author has done a fantastic job of crafting the main characters into believable, real life pre-teens."
-Damien Larkin, author of Big Red

"I would put him at the top of the list of Canadian horror humor authors, as soon as I find some more so I can actually make a list."
-Patrick LeClerc, author of Out of Nowhere 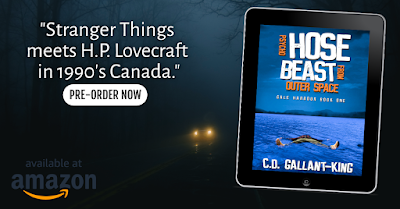 Do you want to help out with the release of PSYCHO HOSE BEAST FROM OUTER SPACE? I'm looking for blogs to join the Blog Tour I'm planning for the week of September 28th. If you can help out, please fill out the form below and I'll be in touch to send you the materials you need.

The first Wednesday of every month is officially Insecure Writer’s Support Group day. Writers post their thoughts on their blogs, talking about their doubts and the fears they have conquered. It's a chance for writers to commiserate and offer a word of encouragement to each other. Check out the group at http://www.insecurewriterssupportgroup.com/.
Posted by C.D. Gallant-King at 12:30 AM
Email ThisBlogThis!Share to TwitterShare to FacebookShare to Pinterest
Labels: Insecure Writer's Support Group, IWSG, Psycho Hose Beast From Outer Space