No one would have mistaken Fitz for a successful man, nor a handsome man, nor a particularly smart man. Hell, there were some idle afternoons he even wondered if he was a man, or if somehow a pile of lint from the corner of his living room had become sentient and started coming to work at the comic shop one day.

Obviously that wasn't true. He knew he had been around longer than that because he was still paying off the student loans from the half-finished visual arts degree he had abandoned eight years ago. On his current repayment schedule he should be done somewhere around 2050, but the joke was on the National Student Loan Service: At the rate he was going there was no fucking way he was going to live that long.

Fitz is the main character in my current WIP. He's a painfully average and hopeless loser surrounded by people and supernatural beings with fantastic powers and abilities. He works in a dead-end job, can't find a girlfriend, his only friend is a drugged-out-of-his-mind professional wrestler who keeps getting them in trouble, and he's crushing on a women who is so far out of his league that I can't even make a joke about it because it's too ridiculous.

I'm having a ton of fun writing this story. I've gone in with little planning outside of the opening scene and the ending and a handful of rough character ideas. The main drive of the story is the relationship between Fitz and his buddy Dee, the wrestler. They are so abusive and terrible to each other, it's awesome. I could see this story (if I can stick with it) spinning off sequels and further tales.

So far the story reads like the script of a Seth Rogen/James Franco or Jay Baruchel movie. I don't know if I'll keep it that way or not, but it's really the introduction of a couple of loser stoners to the world of the supernatural. Their reaction to it is ridiculous and over the top. I don't know if anyone else will find it amusing, but I'm having a lot of fun with it, so even if it doesn't go anywhere, at least I have that. 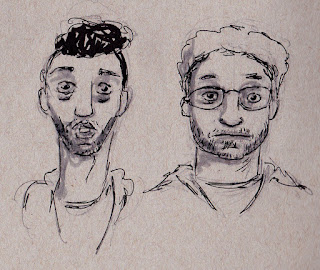 Yeah, basically it's about these guys.

There's some other weird characters in the story that I don't think I'll use for posts this month, so I'll run through them now. There's the owner of the comic shop, a conspiracy theorist nutjob who claims to be the descendant of a famous vampire hunter and a wizard. There's the disabled fortune teller who can talk to dead people, who Dee is obsessed with sleeping with because she's a lesbian. There's a pair of government agents investigating weird phenomenon who are like the competent version of Fitz and Dee - they're actually skilled and get to do cool shit, but they have the same dysfunctional relationship. And of course there's the baddy, who is purely and unabashedly evil for the sake of being evil. I didn't want a nuanced, sympathetic villain, but a homicidal monster of comic-book level villainy, so far above the level of the "heroes" that they have no chance whatsoever of stopping him.

Hooked you yet? I'll let you know how it goes. Cause I don't have a clue where this is going.

Posted by C.D. Gallant-King at 5:30 AM
Email ThisBlogThis!Share to TwitterShare to FacebookShare to Pinterest
Labels: A-to-Z Challenge 2015, Fitz, Work-In-Progress, Writing