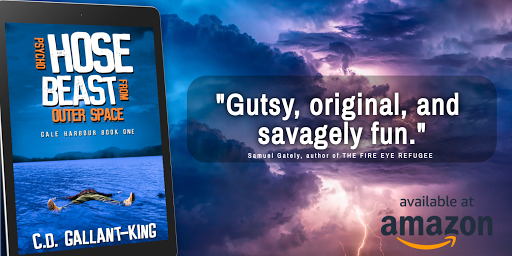 This is it! Less than a month left until the release of Psycho Hose Beast From Outer Space. It's been four years since I launched a full-length novel and did a full-scale release, so needless to say this is a bit nerve-wracking. It's been going pretty well so far. I've already got a handful of (very good!) pre-reviews up on Goodreads, and I've got a bunch more ARCs out there, so I'm hoping for at least a few more reviews by launch time. I've received some pre-orders, too, which is encouraging. I've got a blog tour lined up for the release and I'm busy writing guest posts and interviews. So far, everything is going as planned.

Of course, on top of that I decided to submit not one, not two, but three short stories this month. Plus I'm still juggling working my regular job from home while having the kids underfoot all the time. Plus my wife's health has been up-and-down as usual. Our family doctor is sending her back to see the surgeon, which is never a good sign. Plus we have the Damoclesian Sword of school hanging over our heads - we're keeping the kids home for remote learning but we still don't even know when classes start or what it will look like (or if it's even possible to teach a 5 year-old-from home!). We've been buying supplies and moving things around the house to try and make it more "school-like." Plus my father's birthday was this weekend and we didn't get home to visit again this year, nor do I know when we will be able to with the current situation in the world. It's yet another reminder that I don't know how many chances I (or my children) have left to see my parents. Plus our cat, who has been with us for 19 years, is sick and it's no longer a decision of if we'll have to put him down but when.

So yeah, I haven't gotten a lot of sleep lately.

There are good things happening, to counteract the bad. My father-in-law, who lives just down the street and is obviously much closer to my kids, has officially been in remission for one year after being diagnosed with stage IV cancer almost three years ago. Because I can work from home, we've been in a much better position financially than a lot of people. Not to mention safer, as I don't envy the people who have to go into dangerous and potentially life-threatening situations they never signed up for (ie, teachers). I have to be grateful for that. And hey, I finally got a medication that worked to clear up that gross eczema/skin infection on my hand (yeah, I'm sure you wanted to hear about that).

So life isn't all bad, but it's a lot. Trying to write and publish books with everything else going on is hard, and exhausting. But I also know that I go through cycles and pretty soon I'm going to hit a wall. If I don't get the most out of the productivity while I can, then I'm going to feel even worse in a couple of months when I can't bring myself to write anything.

So yeah, try to be positive, try to keep going. Enjoy the book launch. People do seem to be enjoying Psycho Hose Beast, and this is by far the most buzz I've ever had for a book pre-release. One of the best pieces of feedback I've received, and certainly didn't expect, is that the 12-year-old main characters are very believable. That they feel like real pre-teens with believable thoughts, worries and relationships. I will definitely take that praise, but you know what that means, right? That I totally have the mind of a 12-year old.

I guess I'm okay with that.

Pyscho Hose Beast From Outer Space releases Monday, September 28, 2020. It is available exclusively on Amazon. You can pre-order it on Kindle for just 99 cents, so help a fella out and order it now. You save yourself a couple of bucks and it ensures I get a nice day-one sales boost! 😉 Full details and blurb is below. 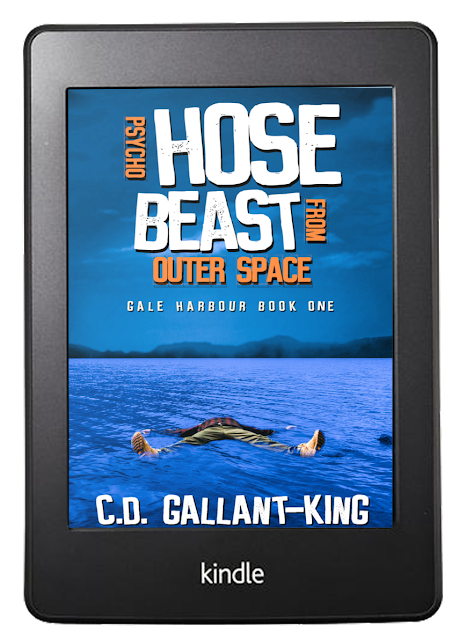 Newfoundland, Canada, 1992.
Gale Harbour hasn’t seen any excitement since the military abandoned the base there thirty years ago, unless you count the Tuesday night 2-for-1 video rentals at Jerry's Video Shack. So when a dead body turns up floating in the town water supply, all evidence seems to point to a boring accident.
Niall, Pius and Harper are dealing with pre-teen awkwardness in the last days of summer before the start of high school. The same night the body is found, the three of them witness unusual lights in the sky over the bay.
Is it a coincidence? Are the lights connected to the rapidly-increasing string of mysterious deaths? And what does the creepy old lady at the nursing home have to do with it?
There is an evil older than time hidden deep beneath the waters of the North Atlantic. It is hungry, and vengeful, and it has its sights set on Gale Harbour to begin its path of destruction. All that stands in its way are a group of kids who would rather be playing Street Fighter II...
AMAZON.COM | AMAZON.CA | AMAZON.CO.UK
GOODREADS
Special Pre-Sale Price: $0.99
Regular Price: $2.99
Paperback: $12.99
(All prices in USD)

New comments are not allowed.