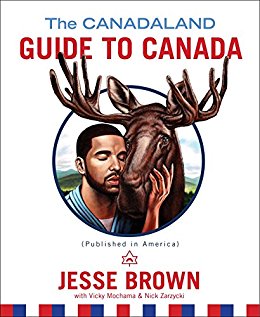 Anyone who followed my A-to-Z blog posts last month know that I'm fascinated by weird and obscure Canadian trivia and history. Turns out I'm not the only one. The Canadaland Guide to Canada (Published in America) by journalist and podcaster Jesse Brown is a brand new, hilarious collection of weird, embarrassing, obscene and shameful facts about America's not-so-polite Northern Neighbour that reads like the textbook companion to my blog series.

This book tries really hard to make you feel ashamed to be Canadian. Canada is known as a polite and progressive country, and while that's generally true, we also have A LOT of skeletons in our closet. This book takes all of them out and shakes them in your face for the world to see. It dispenses a lot of myths about Canada that other countries have been parroting for so long that we've started to believe them ourselves.

Some of these stories are just silly. Like when American Civil War Veterans invaded Canada in 1866, the head of our military and soon-to-be first Prime Minister, John A. MacDonald, spent the entire battle drunk in his office. Or the fact that in the early days, the government tricked people into moving here by never mentioning the weather or the word "snow" in their immigration material.

Some of the stories are also horrifying. For example, did you know the Indian Act (which I mentioned in a previous post) was actually the inspiration for South African government's apartheid policy?

Some of the delightful characters you'll meet in the pages of the book.

It just goes on and on like that. Page after page of hundreds of short stories, facts and quotes, just hitting you like a machine gun full of Tim Hortons donuts. It's hilarious and cringe-worthy, but it's almost too much. I had to take breaks from it a few times because it was an onslaught of information overload. It's probably better to be read in snippets and funny chunks instead of trying to power through in one sitting. Much like a fine poutine, one cannot gorge oneself too deeply lest one risk throwing up all over the place (I think I screwed up that metaphor, but you get my point).

The level of sarcasm is orbital, which kind of actually distracts from the sheer ridiculousness and extreme unbelievability of some of the true stories. My one complaint is that Brown tries to be a bit too cheeky at times; the stories are over-the-top and funny by themselves, his snide remarks and sarcasm actually made me question which parts were actually true and which were his exaggeration, which led me to have to look up a few of the crazier-sounding facts. Which, come to think of it, may have been his point.

All in all, this is a terrific reference that every Canadian should read. So should every non-Canadian actually. God knows we can stand to be taken down a peg or three; we spend enough time mocking Americans that it's only fair we take a good hard look at ourselves, too. 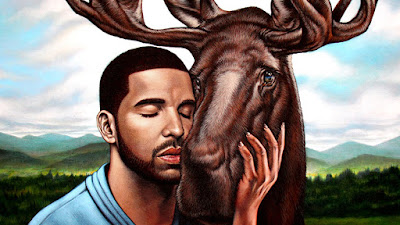 In case you missed it, yes that is Drake canoodling a moose on the cover.