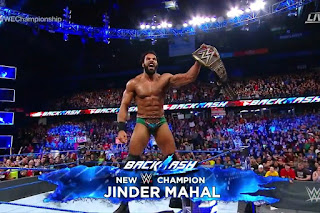 On May 21, Jinder Mahal defeated Randy Orton to become the 50th WWE World Heavyweight Champion, as well as the first-ever WWE World Champion of Indian descent. Billed from "Punjab, India," before his shocking upset win last week, Mahal was best known for wearing a turban to the ring and speaking punjabi in his interviews (well, besides a brief-stint when he wore leather pants and was part of a comedy rock trio with a Scottish guy and a ginger trailer park redneck - wrestling is weird). Wearing foreign clothes and speaking a foreign language has been a surefire way to make a wrestling villain for decades, ever since we had German Nazi wrestlers after World War II and Soviet Russians during the Cold War. There was also a period in the mid-2000s when they tried it with Middle-Eastern terrorists, but that went over really badly.

What is my point, besides the fact that wrestling is terribly racist? Like most of his villainous predecessors, Jinder Mahal is not quite what he seems. Like infamous Nazi wrestler Hans Schmidt and Soviet Ivan Koloff, Jinder Mahal is actually from Canada. 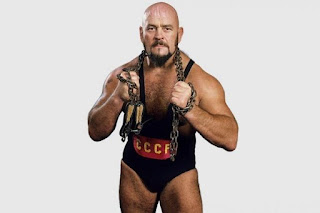 Born Raj Singh Dhesi in Calgary, Alberta in 1986. Unlike his predecessors, at least Mahal is actually of Punjabi-Indian descent (Hans Schmidt - real name Guy Larose - was Quebecois). His uncle is Gama Singh, another famous Indian wrestler, and one of his first trainers along with Bad News Allen, a famous African-American wrestler who made his home in Calgary. With that kind of lineage, Mahal started off his career on the right foot. He began training in 2002 at just 16 years old and joined the big leagues, World Wrestling Entertainment, in 2011. From the start, he always played up his Indian heritage, because it was a simple (again, racist) gimmick that made it easy for people to boo him.

I'm sure it was those early lessons from Gama and Bad News that guided the young Mahal's decisions. Gama also played up his Indian heritage, and Bad News was famous for playing a streetwise black brawler from the  New York (to be fair, he actually was a streetwise black brawler from New York - but also an Olympic medalist in Judo). Both went far with their stereotypes, but neither made it to quite the height of Mahal's recent success. 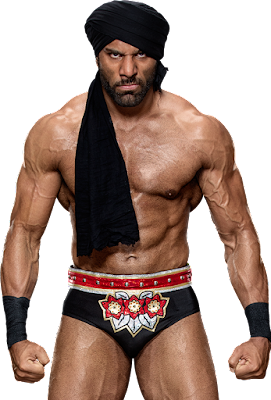 Critical to Jinder's success is his supernatural quantity of veins.

We all know that pro-wrestling is scripted, and that champions are chosen not necessarily because of their skill but because they can make their company money. There have been criticisms that Mahal is just a mediocre wrestler with a boring, old-fashioned character, but obviously the WWE sees something in him. It's true that the last year he has worked his ass off, getting into incredible shape and throwing himself fully into whatever he's asked to do. But there are plenty of guys in that boat, what makes Jinder so special?

I'll give you a clue: It rhymes with 1.3 billion people in India.

WWE is a global business. While it's a house-hold name in North America and most of Europe, it's always trying to get into new markets, especially the huge, untapped markets of India and China. India loves professional wrestling. Western wrestling shows there are rare, but always play to enormous crowds. WWE recently signed a new TV deal to bring their product directly into Indian homes, but they needed a face that the population could relate to and get behind.

There are also rumours he got a raise for nearly taking off an Irishman's head with an elbow.

Mahal is very aware of his position, and why he's being pushed in the direction he's going. He was in the right place at the right time, but he worked hard to be in that place, in order to get that lucky break. Wrestling works like most other types of show business. At the same time, though, he's also acutely aware that he's now a role model for Indian kids around the world, and even if he's playing a villain on TV, he wants to take that position seriously and show his heritage proudly. Hell, even though he's a villain in the US, it's quite possibly he'll get cheered overseas for beating up Americans.

Even Canada is proud of their new champion. The Legislative Assembly of Alberta took a moment last week to actually congratulate their native-born son on his big win.


Pictured: Not the Legislative Assembly of Alberta.

Will the WWE make Mahal's reign something memorable and significant? Or will he be just another cowardly foreign bad guy, looking like a chump in every match and just keeping the belt warm until another the next smiling (American) hero comes along to defeat him? History would suggest that it's probably the latter. Despite claiming to be a global phenomenon, the WWE is not known for its delicate handling of the international superstars. Take their last big Indian "star" wrestler, The Great Khali (Dalip Singh Rana). A legitimate huge name and famous movie star in his homeland (as well as appearing in big films in the US like The Longest Yard and Get Smart), in the WWE he was treated as a complete joke because he was awkward and talked funny. 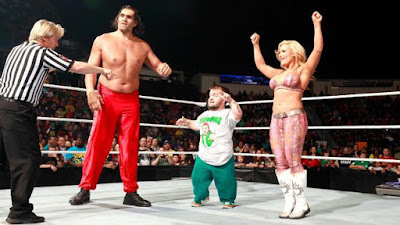 Here's Khali is in a comedy team with a midget and the farting woman (no seriously, that was her gimmick). In wrestling, being foreign, small or a woman are all fair game for mockery.

Who knows. The WWE has struggled recently to become more responsible and less offensive, not just because they're targeting global markets but because it's goddamn 2017. This is not a 1950s Southern country fair. Some of the folks in charge keep forgetting that.

So good luck, Jinder, with overcoming decades of discrimination and oppression. Maybe you'll be the one to finally break through and prove that a "foreign" (again, Canadian) guy can go far in this wrestling business. As long as you keep putting on those awesome Bollywood-style dance shows, we'll be behind you.