I'm not quite sure what the difference is between a "blog hop" where you tag fellow bloggers and a "blog award," but I'm going to put my shame of self-congratulation aside for a moment and say, "Yay! I was nominated for a blogger award!"

It's one of those thingies where you fill out questions and link back to other bloggers. The questions can be pretty fun sometimes though, so let's see where this leads.

It also features handy step-by-step instructions, which is nice. 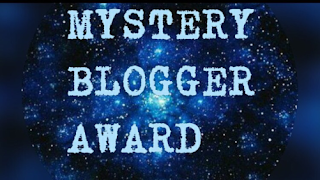 03. Thank who ever nominated you for the award.

I would like to thank True North Bricks. He runs an incredible LEGO-themed blog that I discovered through the A-to-Z Challenge, and now he's going to be my hook up for all the best deals on LEGO.

04. Mention the creator of the award and provide a link as well.

This award originates from Okoto Enigma’s Blog, which I'm not at all familiar with but you can check it out.

05. Tell readers three things about yourself.

Man, I think everyone already knows the vaguely interesting things about me. I'm from Newfoundland, I have a degree in Theatre... How about that I married my high school sweetheart? As of this year we've been together 20 years (married for thirteen). Not only that, but we actually met at the bus stop on the first day of school. We're so disgustingly cute that our hometown paper wrote a story about us.

It's a small town. News is hard to come by.

I definitely would have nominated True North Bricks… but he nominated me. Here are a few other awesome blogs that I loved from the A-to-Z Hop.

No Love For Fatties
Her theme for the A-to-Z was Harry Potter, and she just exploded fangirl geekiness all over the place, which was so much fun. But besides HP she's blogging just about every day with all kinds of fun and funny stuff, definitely check her out. Especially keep an eye on the "Just for Giggles" tag, featuring hilarious memes, stories about underwear and more ridiculous stuff about Canada.

The Old Shelter
Sara Zama's blog is worth it just for incredible retrospective she did on 1940s Film Noir for the A-to-Z, but there's tons of other great stuff there, too. She did a similar series on the Jazz Age last year, and the Roaring Twenties the year before that.

Atherton's Magic Vapour
Melanie is just weird, but in a good way. I think we share a similar sense of humour and weirdness. For her A-to-Z she wrote new captions on 100-year old woodcut images from the Strand Magazine, and it was glorious. A couple of years ago she wrote a full mystery novel and dressed up in character for 26 different characters from the book, so she is serious about this A-to-Z thing.

07. Notify your nominees by commenting on their blogs.

Can I finish posting this first?

08. Ask your nominees any 5 questions of your choice, with one weird or funny question.

Here is what I was asked:

If you were a LEGO Minifigure, what would you look like?
I'll do you one better, here's my whole family: 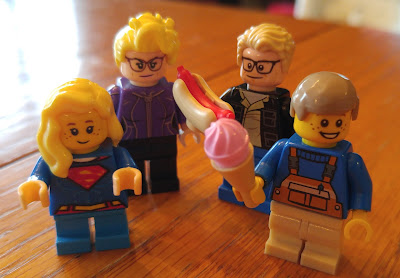 I'm the guy with the hot dog.

If you could fulfill one dream right now, all expenses paid, what would it be?
Take the real-life version of my LEGO family to Euro Disney. I would dearly love to bring my kids to a Disney park, but there's no way I'm setting foot in the US for at least another four years. And hey, while we're in France we can check out some other cool stuff in Europe, too!

When you were little, what did you want to be when you grew up?
A bricklayer. No, really. I loved LEGO, and this was the logical extension of my interests.

Based on your answer to question #3, now that you are grown, did you reach your goal? Why or why not?
I still play with LEGO, but that's about it. Part of me wishes I had followed through with the bricklaying, though. It probably pays better than what I'm doing now. After bricklaying, the second thing I wanted to be when I grew up was a writer, so I'm kinda doing that now.

Knowing what you know now, what advice would you give to your younger self?
Don't give up on publishing so quickly. When I was in my mid-twenties I wrote my first novel and shopped it around, getting nothing but rejections. While I kept writing, I didn't bother trying to get anything published for ten years. Had I pressed on, I probably would have gotten something published, or maybe gotten in on the ground floor of the self-publishing craze. Either way I would be way farther ahead than I am now.

Here are my questions for my nominees: Because this is me, I changed it to one kinda normal question and four slightly more weird ones.

1 - What's your favourite book, and why?

2 - Who is your favourite professional wrestler?

4 - You're about to be dropped into a fictional universe and be granted really cool powers - quick, which one do you want to be: A Jedi (or Sith) in Star Wars, a witch or wizard in Harry Potter, or a mutant in X-Men?

My favourite post on this blog was probably the original Toronto Circus Riot post, but I already re-blogged that for the A-to-Z so I'm not going to do it again. Instead I'll share my in-depth study of how Jesus Christ is a High-Level Dungeons & Dragons Cleric from my other blog, Rule of the Dice. I was really proud of that one but it doesn't get nearly as many hits as I think it deserves.