May the 40th Be With You

Forty years ago today, a film was released that would forever change movie-making and fandom in North America. I'm not going to go into an in-depth discussion of that movie, you can get that at countless sites around the internet. Instead, I'm going to reminisce on my personal experiences with that film and how it affected my own life. Plus I'm going to share some of my favourite backstage set photos. 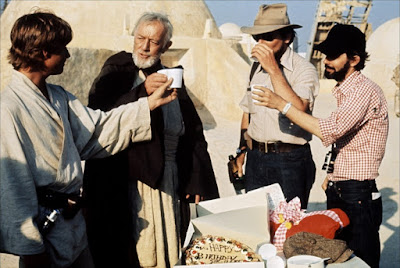 Sir Alec Guinness celebrating his birthday on the set of Star Wars. Fun fact: Mark Hamill, still playing Luke Skywalker, is now older than Guinness was when they filmed the original movie.

Star Wars came out a few years before I was born. Return of the Jedi came out when I was only three, so I didn't get to see any of original trilogy in theatres during it's original run. I first remember watching Star Wars on broadcast television when I was about five or six. I was in my room watching it on a 12-inch black & white TV. I must have been sick, because I didn't usually have a TV in my room, my parents must have put it there because I was stuck in bed. I vividly remember watching Obi-Wan on Tatooine, a scene probably not far off from the one they were shooting in the photo above. 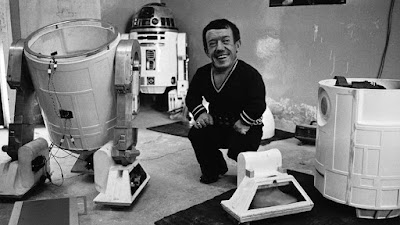 The next time you complain about CGI, remember that poor Kenny Baker spent YEARS inside that bucket for these movies.

I don't remember many details about it, but I remember I must have liked it because I had my parents tape it the next time it came on and then I watched it repeatedly. I loved the space ships and lightsabers and wanted some of my own, though by that time the toy craze was waning and the action figures and models were hard to find. When I visited my older cousin a few months later and discovered he had literally HUNDREDS of the figures, plus the Millennium Falcon and a TIE fighter and gads of other stuff, I was SO jealous. The biggest shock I got that visit though, was when my cousin told me that Darth Vader was Luke Skywalker's father.

I couldn't believe it. I got mad at him for lying to me. He swore it was true. I of course hadn't seen The Empire Strikes Back yet, and my tiny mind could not process this new information. When we got home I made my parents rent Empire and Jedi (video rental was a big deal in the mid-eighties) and watched them as the ever-expanding universe exploded my mind. AT-AT walkers. Yoda. Ewoks. Jabba the Hutt. A GREEN lightsaber. I never did get any of the toys, but those images were permanently seared into my impressionable young mind. 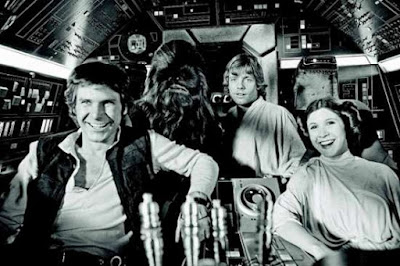 The thing I love the most about the original movie is how earnest everything is. The cast and crew really seemed to be having fun.

Eventually my interests moved on to other things. I got into other movies and cartoons, starting playing baseball and collecting hockey cards, got big into LEGO. Star Wars was always there, but it wasn't an over-powering central focus in my life. But then, in the early nineties when I was about 12 years old, it all came crashing back in a torrent.

Several events came together in a perfect storm for me. New Star Wars novels started appearing, featuring the continuing adventures of Luke, Han, Leia, and an ever-growing cast of supporting characters. New toys started popping up, too. I was actaully get a little old for it, but I wasn't going to turn up my chance to finally get a lightsaber and a Darth Vader action figure. 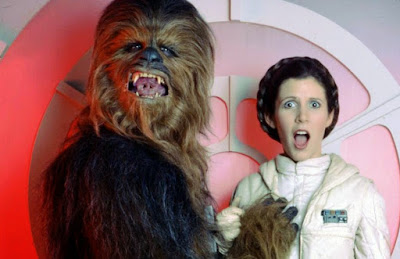 The biggest thing though, was that I had started to get into roleplaying games like Dungeons & Dragons, and I discovered that Star Wars had a roleplaying game, too! I could create my own adventures and characters, and tell new stories with my friends. It was glorious! My friends and I played every day after school for months on end, crafting a broad, decades-spanning epic about our own rag-tag group of heroes: Kan Saga, the serious, studious Jedi student. Cris Bahn, the rebel-pilot-turned-businessman, who ran a galaxy-wide shipping business, settled down with a family, and then went out and started training as a Jedi. Wookie Nookie, the loser/stoner/artist/musician Jedi who had survived the Emperor's purge and eventually went on to become the greatest Jedi master of them all, taking over Luke Skywalker's school for him.

Our adventures went on for over a year (of real time, like I said, it was decades in the game), until in the epic climax Cris Bahn turned to the Dark Side and Kan Saga immediately murdered him. Our stories always ended that way. 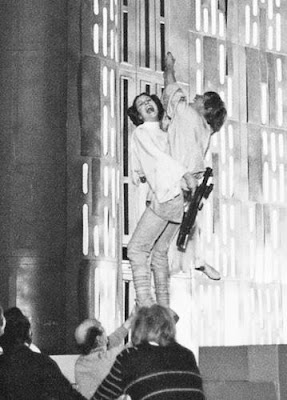 You try to do this without laughing.

Now, because I had forged personal connections and bonds to it, Star Wars had dug even deeper into my soul. I was a massive, unabashed Star Wars nerd. I would not only celebrate the release of Star Wars every year on May 25, I would also celebrate September 25, Mark Hamill's birthday. I actually put up a picture of Mark on my locker one year for "Mark Hamill Day" and got beaten up for it.

I don't know if nerd bullying still exists today, but it was certainly alive and well in 1994.

Jump ahead twenty years. My interests and obsessions with Star Wars waxed and waned over the years, but recently something amazing has started to happen. My kids have started getting into Star Wars, and I'm getting to experience it for the first time all over again.

Two Christmases ago, my son, just shy of four, got a little toy X-wing and TIE fighter. He was visiting me at work on Christmas Eve, and we ran down the hall together, saying "pew pew!" as the ships chased each other back and forth. Over the next year he got more toys, and Star Wars LEGO, and books, and pretty soon he was super into it. I didn't need to force (no pun intended) it on him - he picked it up quickly on his own and started to ask for more. I don't know if he just saw how excited I was for it, or if it genuinely touches some deep story-telling part of kids. Heck, even his 2-year old sister is getting into it, and she already knows all the characters - Leia, Dawth Vader, Chewie, Yoda, Awtoo, Treepio. It just seems to strike a chord with kids. 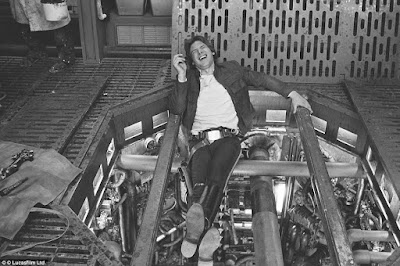 This past Christmas, I watched Star Wars with my son for the first time. He sat on the couch and snuggled into me as the Star Destroyer roared across the screen at the beginning, watching enraptured as the stormtroopers burst through the doors, blasting away at the rebels. It wasn't long before he was on his feet though, and I'll never forget the sight of him bouncing up and down in excitement as the X-wings attacked the Death Star at the end.

A few weeks later, when we visited Legoland for his 5th birthday, we found a life-sized LEGO model of R2-D2. He insisted I give him my debit card, because he wanted to "protect the secret plans!" and re-enact the scene were Leia loads the Death Star plans into the droid.

It's all come full-circle. Star Wars, as a cultural phenomenon, has grown to unfathomable size. And as long as it keeps making money for Disney, new movies will keep coming out. And I'm okay with that. It's become something bigger than George Lucas, bigger than the original fans who loved it in the 70s and 80s. It now belongs to millions of people, and while it brings them all together it means something different to every one of them.

I'm perfectly happy with that. I don't know if my kids will grow up to be Star Wars nerds or if they will show the movies to their kids with the same relish I did, but that's okay. It means something different to everyone. For me, I think my memories of watching my kids watching Star Wars are even better than my those of me watching it myself.

Thank you for giving joy to my family and I for forty years. Here's to forty more. 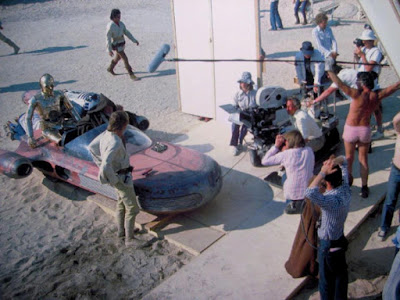 Also, any time you start to take Star Wars too seriously, just remember that there's a sweaty, tanned dude in pink hotpants just out of frame.

Vanity Fair released a wonderful article and series of photographs by Annie Leibovitz yesterday about Episode VIII: The Last Jedi. You should go check them out here, but a couple of the photos were just so poignant I had to steal borrow them to share here. Enjoy. 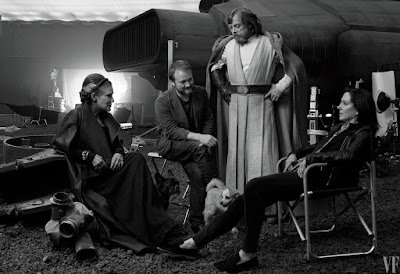 Carrie Fisher and Mark Hamill with Last Jedi director Rian Johnson and Lucasfilm head Kathleen Kennedy (probably the most powerful woman in Hollywood). Also, Carrie and Mark's dogs are there, because of course they are. I love this picture. 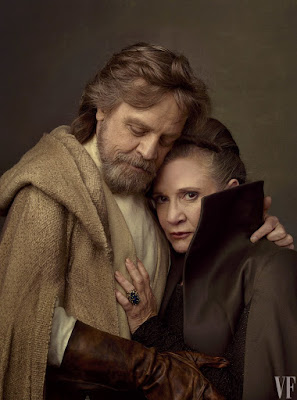 Mark and Carrie did this for forty years. Go back and look at some of those pictures of them as kids and try not to get choked up at this one. 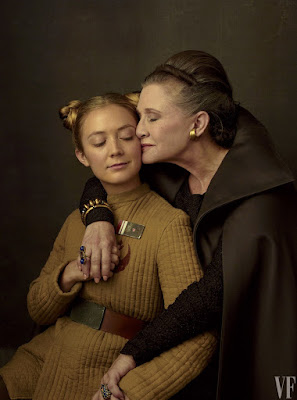 Carrie Fisher with her daughter, Billie Lourd, who plays Lt. Kaydel Connix in The Force Awakens and the upcoming The Last Jedi. Sigh. We're still getting over you, Carrie.