I Just Discovered I Love Audiobooks

For the longest time I was hesitant to listen to audiobooks. I found nothing inherently wrong with them, they just didn't seem to be for me. For some reason my mind wandered whenever I listened, and unlike when reading and you miss something, with audiobooks it's especially hard to go back and re-read/listen to parts you missed. It just didn't seem worth the effort.

Those opinions were formed before I got a job with a ridiculously long commute, as well as a lot of data entry where my ears are free to do to other things. For the last few years I've been listening to a ton of podcasts, but lately I've been finding myself bored with that too. Along with the guilt that I don't do nearly as much reading as I should, I decided to give audiobooks another whirl, and I'm so glad I did. In just two weeks I've discovered a LOVE for audiobooks I never imagined, and I suddenly feel so much more productive now, being able to chip away at my TBR pile while simultaneously getting other tasks done. It's amazing.

In those two weeks I've "read" three books I've meant to get to for awhile, and I've discovered that audiobooks improve books in (at least) three awesome ways. 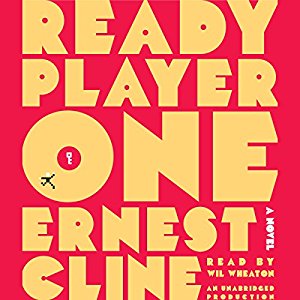 The first book I checked out was Ready Player One by Ernest Cline. Now, this book was hugely popular a few years ago and is about to become a major Steven Spielberg movie, but in all honesty I didn't think it was very good. The 80s video-game nostalgia seemed perfectly tailored for me, but the flat characters, dumb stakes and over-reliance on said nostalgia were just grating. Not to mention it was riddled with plot inconsistencies that I would have been crucified for had I written them.

If had I been actually reading it I doubt I would have made it through. But the story was saved by the charming and likable narration by Wil Wheaton. While the weakest of the three narrators I listened to, Wheaton still has an engaging voice and a spirited narration, so it was nice to listen to him drone on in my ears for a few days. 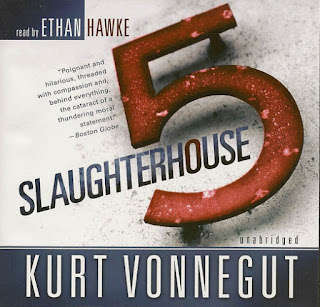 Book number two was Slaughterhouse Five. I had read it many years ago, but despite it's place as a classic it was among my least favourite of Vonnegut's books. I don't know if it was because I read it in a rush of other Vonnegut books so it didn't particularly stand out for some reason, or maybe I just didn't get it. But that changed after I listened to Ethan Hawke's rendition.

Now, I don't know if Hawke is actually the best choice for Slaughterhouse Five (there's another version read by James Franco that I think might work even better). He's a bit too smooth and suave, but boy does he bring it to life. He instills it with so much pathos and realness, it really hits you in the gut and plays up the darkness while still maintaining that mischievous satire that I love. I have really reconsidered my opinion on Slaughterhouse Five thanks to the audiobook, jumping it way up there in my Vonnegut canon.

3. It can make a good book absolutely exceptional. 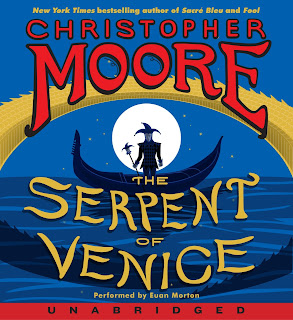 The third book was The Serpent of Venice by Christopher Moore. I'm pretty open that Moore is a heavy influence of mine (which I think is probably most obvious in Hell Comes to Hogtown), so I generally enjoy his books anyway. But Euan Morton's reading of Serpent of Venice is astounding. It's the first time I've understood what it means when it says a narrator "performs" a book.

For those who don't know him, Morton is a stage actor and singer who played Boy George in Taboo in both London and on Broadway, currently performs as King George in Hamilton on Broadway, and has credits in countless other shows on both sides of the Atlantic (random side fact: his son plays the lead in the TV show Young Sheldon). Morton brings his considerable skills to Serpent of Venice, turning it into basically a 10-hour-long one-man show where he performs all the characters beautifully with different voices, and captures Moore's humour with perfect British wit. He's like a one-man Monty Python, it's amazing.

I also just discovered that Morton also did the narration for two other Christopher Moore books, Fool and Sacre Bleu, so I am pumped to check those out.

Long story short, I'm really digging audiobooks and I can't believe it took me this long to jump on board. Since I wrote this up last week I've also listened to a Dave Barry book and I'm half-way through a PG Wodehouse collection (For reference, the Dave Barry book wasn't very good but it still had a few laughs in it). I haven't been this prolific in my "reading" in years. I think I've listened to more books in the last month than I read in the entire year prior. I'm looking forward to making a nice dent in my TBR pile in 2018.

Let's do this.
Posted by C.D. Gallant-King at 12:30 AM
Email ThisBlogThis!Share to TwitterShare to FacebookShare to Pinterest
Labels: Audiobook, Christopher Moore, Hell Comes to Hogtown, Kurt Vonnegut, Lists, Review