The History of "In Flanders Fields" 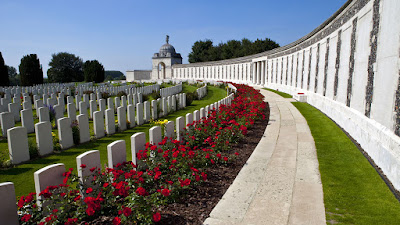 "In Flanders Fields" is a famous poem lamenting soldiers lost in World War I, but has since come to be associated with Remembrance Day (also known as Armistice Day or Veterans Day), and is commonly read at services across Canada on November 11. It was written by Major John McCrae, a Canadian military doctor and artillery commander during the Great War, and Canadians have latched onto it hard. I don't think it's wildly known in the US, but in Canada it's a huge, cultural touchstone that school children are forced to memorize somewhere between the National Anthem and the theme song to Hockey Night in Canada. For those who are not familiar, it goes a little something like this:

In Flanders fields the poppies blow
Between the crosses, row on row,
That mark our place; and in the sky
The larks, still bravely singing, fly
Scarce heard amid the guns below.
We are the Dead. Short days ago
We lived, felt dawn, saw sunset glow,
Loved and were loved, and now we lie
In Flanders fields.
Take up our quarrel with the foe:
To you from failing hands we throw
The torch; be yours to hold it high.
If ye break faith with us who die
We shall not sleep, though poppies grow
In Flanders fields.


According to legend, on May 2nd of 1915, young artillery officer named Lieutenant Alexis Helmer was killed in Ypres, Belgium. The chaplin had been called away to preside over what was surely an endless string of funerals, so Major McCrae was asked to conduct the burial service for Lt. Helmer. After the service, looking out over the lines of crosses and the poppies blowing between them, a grief-struck McCrae was moved to pen the original draft of the poem. Dissatisfied with his work, he crumpled it up and tossed it aside, but another soldier in his unit found it and, moved by the doctor's stunning words, urged him to have it published.

While it is true that Lt. Helmer died on May 2nd and Major McCrae conducted his funeral, the more likely version of the story is that it actually took the doctor months to write the poem, whenever he had free time between tending to horribly injured soldiers. Not quite as romantic, but far more visceral.

Want to hear something even less romantic? McCrae originally submitted the Poem to The Spectator, a conservative London-based magazine of politics, culture and current affairs. In 1915 it had already been around for nearly 100 years, and is actually still in publication today. Like most first-time writers, McCrae's work was rejected. I guess the editor had reached his poppy quota for the quarter.

After being turned away by one of the oldest and most prestigious publications in London, guess where McCrae turned next? 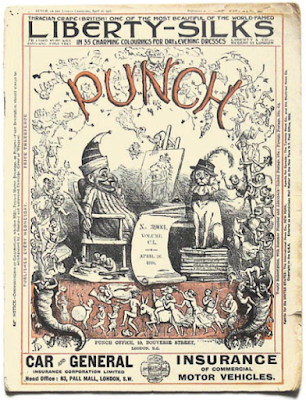 Punch Magazine was a weekly periodical of humour and satire, and they practically invented the political "cartoon" comic in the 1840s. 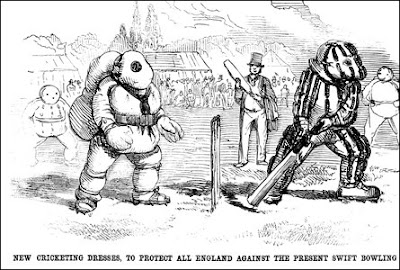 I don't understand any of this.

For a modern comparison, I wanted to say it was like getting rejected from the New Yorker and submitting to Mad Magazine instead, except the The Spectator is probably more like far-right rag The New York Observer, which holds the distinction of being one of the only newspapers that endorsed Trump during the 2016 US election. Coincidentally, the Observer is owned by Trump's son-in-law.

So yeah, it was like McCrae got rejected from The New York Observer then submitted his poem to Mad Magazine. Either way, it's still weird.

But at least the classic poem got a classy presentation worthy of its future status as a cultural milestone and a stirring reminder of the horrors of war, right? 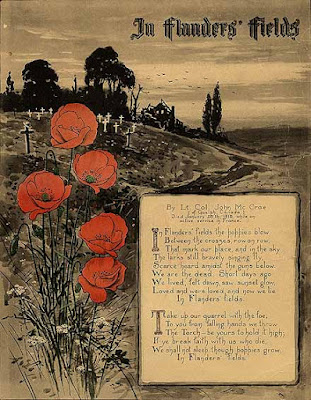 The famous image above was actually a print created by the Heliotype Company in Ottawa in 1918, to commemorate the death of the poet. Here is the original page where "In Flanders Fields" appeared, in the December 8, 1915 issue of Punch Magazine: 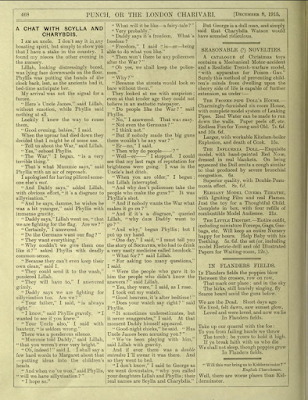 What, it doesn't jump out at you?

In case you can't see it - apparently people's eyesight was way better back in the early 1900s - the poem appears in the lower right hand column, sandwiched between a fake catalogue of Christmas toys (including "The Frozen Pipe Doll's House" with real leaking pipes and "The Influenza Doll" that coughs when you squeeze it), and this joke:

"Will this war bring us to Kidderminster?"
English Churchman
Well, there are worse places than Kidderminster.

I don't have a flipping clue where Kidderminster is (nor do I quite get the joke), but apparently Robert Plant of Led Zeppelin grew up there. That's the kind of biting satire that was common in Punch Magazine. So what the hell was an introspective poem by a morose soldier doing in there? McCrae wasn't even credited in the original printing.

Despite its humble beginnings, "In Flanders Fields" caught on and was quickly adopted by the English Commonwealth as a stirring tribute. The significance of poppies as a symbol of remembrance links directly to this poem. Even a hundred years later, the poem and the red poppies are a solemn reminder that Canadians in particular hold close to their hearts - literally, as many wear the small flower over their left breast as a symbol to the lives lost in war.

As for the poet, Major McCrae became world-renowned for his words, though continued to serve on the front. He rose to the rank of Lieutenant Commander and continued his work as a field doctor. John McCrae worked at numerous hospitals through the war, always pushing himself to help as many people as possible, ignoring his own health and well-being. He pushed through his exhaustion and illness and eventually succumbed to pneumonia on January 28, 1918, heralded as both a war hero and a brilliant poet.

Posted by C.D. Gallant-King at 12:30 AM
Email ThisBlogThis!Share to TwitterShare to FacebookShare to Pinterest
Labels: Canada, History, In Flanders Fields, Remembrance Day, War