Last month I raved about how I'd discovered audiobooks and couldn't believe they were missing from my life. I've been flying through books the last few weeks, "reading" more books in a month and a half than I did the full year prior, and my pace doesn't shown signs of stopping.

I figured since I was going through them anyway, I might as well take the time to jot down a few of my thoughts, both for my own benefit of remembering them down the line, plus as a suggestion (or warning) to anyone else who may want to give these a try. 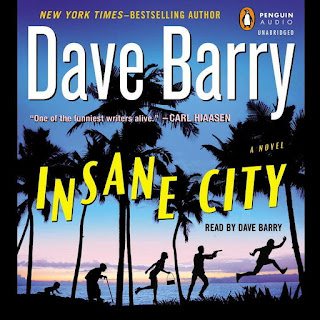 This was without a doubt the weakest audiobook I've experienced so far. It's written well enough - Dave Barry is a bit too broad and general for my humour, but I appreciate the allure of it. It's got some great one-liners and plenty of wacky situations, but it read a bit too much like the script of a movie to me. Honestly, it seemed like Barry was trying really hard to write a book that could be adapted easily to a screenplay, like The Hangover. My thoughts on the matter? Just watch The Hangover, it's much better.

The worst part, though, was Barry's reading of the text. That's all it was - reading, like a high school student tonelessly presenting his book report in front of the class. Not everyone can be Euan Morton (see Serpent of Venice) doing all the character voices and accents like a one-man stage show, but at least put a little emphasis and inflection in your voice. The weird thing is, Barry narrates all of his own stuff. Is the non-fiction this dry and boring, too? It could have been really funny, with the right narrator, but Barry just really killed my interest in this one. 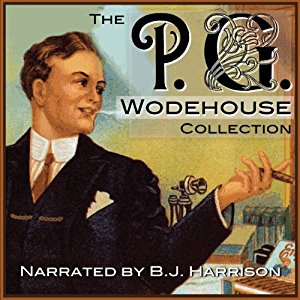 I freely admit this type of early 20th century British humour may not be for everyone, but I absolutely love it.

P.G. Wodehouse is a huge influence on some of my favourite writers, such as Terry Pratchett and Douglas Adams (and really, any British humourist from the later 20th century), so what's not to love? The snappy dialogue, the quick wit, the wry British comedy of manners - Wodehouse perfected this comedy style that would go on to be adapted by so many, and B.J. Harrison performs it wonderfully. He uses the style of narration common to many English voice actors, adopting different voices, accents and speech patterns for every speaking role, so that it ends up sounding like a radio play performed by one actor.

This collection contains one novel (Right Ho, Jeeves) and about twenty short stories, so it's a bit on the long side, especially as the stories tend to get a bit repetitive, but the novel itself is a prime, sparkling example of Wodehouse's Jeeves & Wooster stories. It's hilarious, fast-paced and ridiculous, not to mention surprisingly crass. I've never heard an old British lady call her nephew an "ass" so many times in my life. True, it's tame by today's standards, but after the very proper and mannerly stories in the first half, all those "cuss words" thrown around in the novel were downright scandalous, and is a perfect example about how profanity, when used carefully and sparingly, is a potent comic weapon. I've never quite mastered it myself (Hell Comes to Hogtown has something like 400 f-bombs in it), so it's nice to observe a master.

Carrie, written by Stephen King and narrated by Sissy Spacek 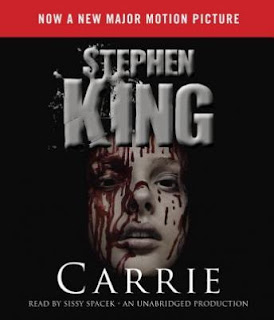 After listening to mostly humour for the last few weeks, I wanted to try something different. Will a dramatic story be as good in audio as a joke-filled one?

Carrie, at least, was excellent. I saw the original movie years ago but somehow I had never read the book. The movie was awesome, and the book, while different, was also exceptional. The ending was very different, and I agree with Stephen King that the ending of the film version is actually better.

That being said, the ending of the novel is still evocative. Not to get too spoilery - while the film ends with a bang, the novel drags on, and then spends considerable time detailing the aftermath of Carrie's rampage. If you ever wanted to see how a small town deals with the brutal deaths of hundreds of people at the hands of a misunderstood girl with godlike power, this is the book for you! It's depressing and heart-wrenching, and left me feeling icky.

Sissy Spacek as the narrator was inspired. Not only is it a fun touch because she played the original Carrie in the film, but because she nails the reading, bringing the weight it needs in the dramatic parts as well as the cold clinical voice of the journalists and scientists investigating the incident. Normally I don't find "scary" books particular scary, nor do they really move me, but Spacek really helps to take you through all the ups and downs of the journey. It's a different kind of thriller. You know, very early on, how the story is going to end, but King and Spacek drag you along for the ride you know is going to end is heartbreak and bloodshed, and Spacek in particular really hammers home the dread and foreboding. It's wonderfully disquieting.

The Stupidest Angel by Christopher Moore, read by Tony Roberts 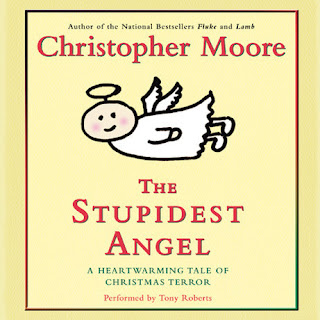 Since the Christmas Season is upon us, I had to throw in one holiday-themed story, didn't I?

Some people curl up with Charles Dickens' A Christmas Carol in December, a familiar tale to get them in the mood for the holidays. For me, it's Christopher Moore's "Heartwarming tale of Christmas terror." Many characters from Moore's other novels appear in Angel, sort of a "Holiday Special" treat for his fans, and I can't begin to cover all the ridiculousness in this short book. There's a washed up former B-movie queen who hears voices. There's a young boy who sees Santa Claus get murdered and then worries that means he's not getting a new PlayStation. There's a talking fruit bat. There's a heartbroken mad marine biologist who, in order to get over his divorce, glues electric diodes to the testicles of lab rats and himself. And of course there's the titular character, the absent-minded, idiot servant of Heaven who performs a lazy Christmas miracle and accidentally raises an entire graveyard full of people... as brain-eating zombies.

This is peak Moore at his most insane, and the story is read well by Tony Roberts. Most of the voices seem to have southern accents, which is weird to me as the story is set in California, but maybe that's just me? Maybe I don't "get" American accents? This, apparently, is NOT the same Tony Roberts who starred in such films as Annie Hall, Play it Again, Sam and Serpico (who also does audiobook narration) but instead by the guy who narrates the Casca: The Eternal Mercenary series? Confusing.

Anyway. This book is great, the narration is pretty good, and if you share my sense of humour you will be simply... having... a wonderful Christmas time (insert Paul McCartney music here).

So, have you read/listened to anything cool this month?