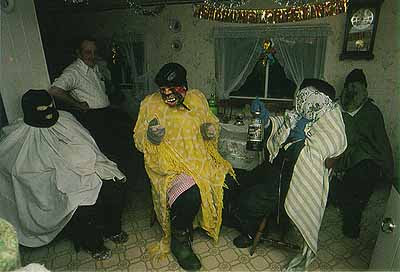 "Who's that?" asked the old woman, rocking slowly by the fire. The lights were dimmed, while the tiny bulbs on the Christmas tree blinked in-and-out, reflecting against tin ornaments and throwing dancing, prismatic rainbows against the wall.

The boy peaked through the tattered curtains of the picture window and his eyes grew wide. "It's mummers, granny."

Out on the snowy lawn, a large group of masked individuals shuffled and stamped, demanding to be let in. With hoods and weird hats, dressed in mismatched, garish clothes, they were unidentifiable. Most carried sticks and clubs, and they showed no intention of leaving until they received an invitation inside.

They pounded on the door again.


Seriously: When a gang of masked, unidentifiable hooligans show up at your house at night in the dead of winter, demanding booze and wielding strange sticks with nails sticking out of them, do you open the door?

In Newfoundland you do.

Mummering is a strange Christmas tradition practiced in Newfoundland, Canada (and remote areas of Ireland) where people show up at your home wearing masks and acting weird and demand to be let in. I am seriously not making this up.

"Traditional" (and I use that term only in the loosest sense of the word) mummering (also called mumming) involves a group of friends and relatives dressing up and visiting local homes during the Christmas season to perform songs, dance and jokes in exchange for food and drink. The mummers dress in outlandish outfits made from whatever they can find - oversized clothes, blankets, jackets stuffed with cushions, pillowcases for masks, whatever. Wearing underwear outside the clothes is popular, as is dressing in drag. Part of the game and performance involves the house inhabitants having to guess the mummers' identities, and the mummers doing their best to remain incognito by altering their mannerisms and speaking with funny voices. 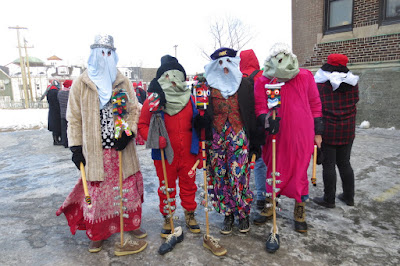 Note the improvised weapons in their hands. Dubbed "Ugly Sticks," these ungodly contraptions are banged to make music. And also to warn you of your impending demise.

The custom dates back to England and Ireland, and the exact details vary from community to community. The reason I put "traditional" in quotes above is because the act of mummering we know today is actually due to a folk revival stemming from the popularity of "The Mummers' Song" by Newfoundland musical group Simani (the video is above) released in 1982. It's a selective and idealized conceptualization of a custom that hadn't really been practiced on the island for a hundred years.

Why had the custom fallen out of practice? Well, probably because it was illegal, since a group of mummers murdered a man named Isaac Mercer in Bay Roberts, Newfoundland on December 28, 1860. The local constables never found those responsible, thanks to their convenient disguises. As a result, the act of wearing a mask in public was banned in Newfoundland, a law that technically still stands to this day (don't tell that to cosplayers at the local comic con). 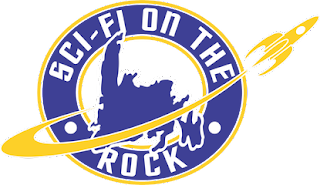 Of course Newfoundland has a comic con. Hell, they even have comic cons in Libya, but it doesn't go over well.

My cynicism aside, it's a fun and silly holiday pastime that the Island embraces wholeheartedly. Mummers have become a symbol of Newfoundland Christmas, moreso even than Santa or Rudolph. There's songs, books, toys, parades, decorations, you name it. I'm not even sure exactly how much people do "actual" mummering, but the idea of it, and what it represents, is ubiquitous.

So next week, after all the presents are opened, the food is cleared away, and you're bored and looking for something to do, maybe pull on a mask, a big wool coat and some over-sized boots and go pound on your neighbour's door.* You might be in for a grand ol' time.

*Disclaimer: Don't actually do this. In most parts of the world this will get you shot. 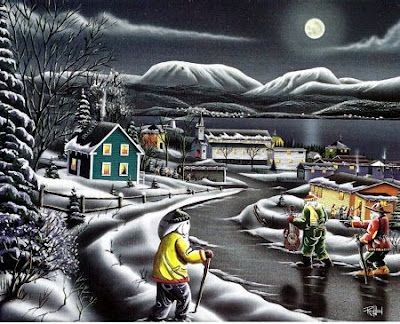 It's not just me, right? This picture is super creepy, right?
Art by Rod Hand