Pay it Forward: Just Buy Something 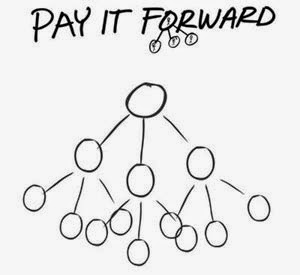 If you follow me on Twitter or Facebook you'll know I've been hawking my book like an old-timey carnival game barker. Kinda makes me wish I had some kind of carny scam to trick people into buying it (BUY THIS BOOK: IT CURES BALDNESS!)

Of course, if you spend more than 30 seconds on Twitter, you will run into someone trying to sell you something. It's like a Moroccan marketplace, but instead of carpets and chickens, you have skeevy corporations selling insurance and terrible app companies using Kate Upton's boobs to sell terrible mobile games. But a very large portion of the wall of social media marketing is every day folks like you and me just trying to sell their shit.
In this day and age, it is very, very easy for anyone to put content out there. Whatever your desired oeuvre - writing, visual art, music, games, film, design, performance, professional wrestling, explicit sex puppetry - there are channels out there to get your work out quickly and usually cheaply. We are living in a utopia of do-it-yourself artists where everyone can create and no one is getting paid.

And there's the rub. Because there's SO much content out there, it's impossible for everything to get an audience and be read/watched/consumed by more than 3 people. In such an open, cutthroat market you would think the best would rise to the top - but really it's more of a case of who's the most willing to put the work in to market the hell out of their content to get it in front of as many eyes as possible. They will put their time, energy, blood, tears and usually money to become a marketing machine to sell themselves. That's how this business works.

I'm not here to tell you how to market your book/game/end table. There are literally millions of websites out there eager to instruct you on the dark seedy side of Internet publicity. I'm here today to tell you let someone's marketing work on you.

I know, it's hard. We as a culture have gotten very good at ignoring Facebook ads and clicking "Skip" on Youtube as fast as humanly possible. But what if that poor sap who's made that ad is like you? Just a regular Joe or Joe-sephine(?) sitting at home juggling a day job and kids and trying to make it in the heartless world of music/film/Ren-Faire jewelry? Whenever you click publish on your material you hope other people give you a chance. Do you in turn give that chance to others?

Maybe it's just the circles I travel in, but it struck me the other day how I've been surrounded by independent artists of all kinds my entire adult life, all of them trying unbelievably hard to make it in their chosen fields.

I've seen actors stripped naked yelling at audiences, baring their souls in tiny theatres with only three people in the audience.

I've seen 3-part, 500-page-per book series that obviously took years of work sit on Amazon with a sales rank of #500,000 with no reviews.

I've seen professional wrestlers throwing themselves face-first on concrete floors trying to make a highlight reel to show someone who might hire them for more than $20 a night.


WARNING: NOT FOR THE SQUEAMISH
Do not watch this video if you are easily disturbed by independent wrestlers nearly breaking their necks to entertain 100 people for 25 bucks. Good news is that he made a full recovery and continued doing equally stupid shit in the ring.

I've seen role-playing game books and supplements with beautiful art, excellent layout and hundreds of pages of content sitting idle on DriveThruRPG with comments like "That's kinda expensive for a PDF..."

I've seen bands travel hundreds of miles, play shows in dirty bars that don't even pay enough for their gas, then give away CD's they couldn't afford to make, just to get their name out there.

Do you support any of those people? Pick up a book, back a Kickstarter, buy a ticket? I know I don't always support as much as I should. But after three weeks of watching practically non-existent sales reports on my own self-published book, I realized that the authors of those books I laughed at or brushed off are probably feeling the same way.

I bought a $5 friggin' drink from Starbucks last week. I could probably have bought a couple of ebooks for that price. Even if I only read the first chapter of each and they were both terrible, that still would have provided me more entertainment (and fodder for stories and blog posts) than a cup of ice and coffee I drank in 20 minutes then promptly forgot.

And you know what? I probably would have made that writer's day. It certainly would have  had more of an effect on him or her than to the board of director's of Starbucks.

So yeah, I just picked up an RPG book by a friend of a friend as well as threw a few bucks at a Kickstarter run by another acquaintance. It means I won't be buying a venti Frappucino on Friday, but that's okay. My local barrista's a bit of a jerk anyway.

Wait, what if he's a self-published writer, too?