IWSG May: Confessions of a Writer Hiding in The Closet 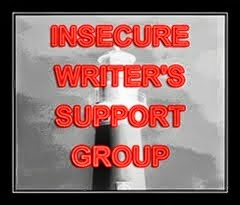 Thirty five years ago today, I was born in a small town in Newfoundland (it's an Island province off the east coast of Canada - look it up). For as long as I can remember, I wanted to be a writer. I can't remember exactly how old I was when I wrote my first story - probably 5 or 6 - and my babysitter had to find a dictionary to look up the spelling of "extraterrestrial." I would not simply accept "alien" (even then I knew word choice was important).

Sometime in elementary school - grade 5, I believe - I dressed as a "writer" for career day. While most of the kids dressed as doctors or lawyers or park rangers or you know, anything else that had an actual recognizable outfit, I just wore my regular clothes and carried a typewriter. No one knew what I was supposed to be, so I scribbled "writer" on a bunch of scraps of paper and handed them out as business cards.

(Had I my time back, I would have worn a house coat and carried an over-sized cup of coffee. Or if I really wanted to be hardcore, a bottle of Jack Daniels in the pocket of the house coat.)

Anyway, my young self was so embarrassed by the situation that the next year for career day I dressed as a wizard. For career day.

Let that sink in for a moment. My 10-year old self thought that being a wizard was less embarrassing than being a writer.

I had no idea what I wanted to do with my life through high school. I continued to write but kinda knew it wasn't a feasible career choice (that pointy hat with the stars on it really stuck with me). Though I did well in Math and Science, somehow I ended up getting a Bachelor of Fine Arts degree in University - my second favourite love after writing is making a fool of myself in front of an audience.

There's another gut punch for you. My 20-year old self thought being an actor was a more viable career choice than being a writer.

Shortly after university I completed my first novel, a Chuck Palahniuk-esque absurdist mess. I think it had some good ideas but was all over the place and had no structure or style worth mentioning. I sent it to a number of publishers and agents and of course got an equal number of rejection letters back, most of which were generic form letters.

After that I kinda retreated again from trying to be a writer. I certainly kept writing, I just didn't put myself out there as "a writer." I wrote 8 novels and dozens of short stories through my twenties and into my early thirties, but no one read them besides my immediate family and a handful of friends. When people heard about this they would ask me "Oh, you're a writer?" to which I would reply, "No, I write." I would never call myself a writer. I had too many wizard's hats and rejection slips under the bed to be comfortable with that.

A couple of years ago I discovered that self-publishing on sites like Amazon was a booming industry (maybe industry is the wrong word - past time?). I thought about it for a long time, since I was sitting on several nearly-finished manuscripts that I could easily publish any time I wanted to. Hell, I could write another book I wanted to (Erotica seems to be popular, I could write erotica). I thought about it and thought about it and even took out one of the books out of The Closet and started tinkering around with it, doing a few edits, changing the ending I was never really happy with. I told myself "I'm going to publish this by my birthday."

That was last year.

Well, now it's my birthday again. I found some beta readers to give me some feedback. I paid someone to design a snazzy little cover. I got my Amazon (and Kobo!) accounts set up and the book is loaded and ready to go.

I still haven't pushed the "publish" button yet.

My current excuse is that my tax paperwork still hasn't come through for Amazon yet. In theory I don't HAVE to wait for this to come through. I can always file next year to get the taxes back, and it's not like we're talking about a huge sum of money anyway. Thirty percent of the royalties on like, 3 books sold is not exactly a staggering figure. But part of me just doesn't want to give the US government a dime if I can help it.

Again, I know it's just an excuse. Previous to the tax thing, for a long time I said I wasn't going to publish the book until I knew for sure what we would name our baby daughter (as the name of the character in the book was the same name we were considering for our little one). Nothing stopped me at any point from changing the character's name, so I am conscious of the fact that I am literally making up one excuse after another.

So why haven't I pushed the button? My mouse cursor is hovering over it right now.

Once it's out there I can't deny being "a writer" any longer. That will be what I am, for better or for worse. Except what if I'm just that writer who has one self-published book that sold 3 copies? Is that really any better than not being a writer at all, or being a "writer" who has a Closet full of unpublished work? Where is the line where I will feel good about this? I don't care if the book gets bad reviews - at least that means someone read it. But what will it take to actually make me happy?

My cursor is still hovering over the button.

Or should I go dig up my old wizard's hat?


This post is part of the monthly Insecure Writer's Support Group blog hop. Check them out. They always welcome people to cry with them on their keyboards.
Posted by C.D. Gallant-King at 1:00 AM
Email ThisBlogThis!Share to TwitterShare to FacebookShare to Pinterest
Labels: Amazon, Insecure Writer's Support Group, IWSG, Self-Publishing, Stephen King, Ten Thousand Days, The Closet, Writing