Here we go again! I've been tearing through audiobooks so far this year, let's see if I can keep it up. I started last year hard and fast too, and burned out quickly, but here's hoping I can top my record for books read/listened to in 2019. 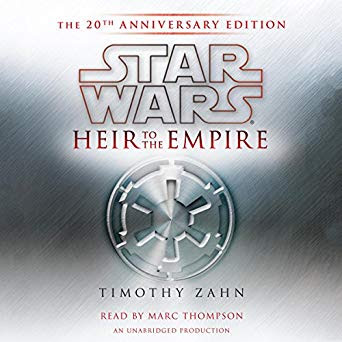 I think I've talked before about how important "Heir to the Empire" was to my Star Wars fandom in my teens. This book, and the West End Games Role-playing game, kept Star Wars vibrant and alive for me in those dark years between Return of the Jedi and (ugh) The Phantom Menace. Not only was it the first "Star Wars" we got in ten years after Jedi, Heir to the Empire was a really good book. Or at least I remember that it was, though it had been some 25 years since I'd read it.

I remembered it very well - I could recite some lines and even full paragraphs exactly along with the narrator as I listened. But it was a lot more... juvenile than I remember it being. I'm not saying that as a major critique, it's just very obviously targeted at young adult audiences, which I guess I didn't notice at the time since I was, at the time, a young adult myself. The language is very "secondary-school," for lack of a better word, which really stands out when it's read aloud in an audiobook.

That being said, the plot is very well thought out (a hell of alot more than most Star Wars movies, to be honest) with genuinely shocking twists and turns throughout the book and the trilogy. The villain, Grand Admiral Thrawn, is without a doubt Zahn's greatest contribution to the Star Wars universe (that and the name Coruscant for the capital planet). Thrawn is a well-developed, Sherlock-Holmes-esque character, who uses his considerable intellect for evil, yet you can't help be drawn to him because he's just so darn interesting. His plots and schemes are ridiculously elaborate and yet well-thought-out and logical, far more than the simple "and now the bad guys ambush the heroes" we usually get in the movies.

So yeah, the book is still pretty good, but I cringed at the audiobook. This was the most over-the-top, over-produced audiobook I've ever listened to. It had a full soundtrack and soundscape, using all the official music and effects from the films. Every scene was highlighted by laser blasts, lightsaber hums, explosions and monster growls. Even during quiet dialogue scenes, there was always the background noise of starship engines humming in space or animals chirping on-planet. It was really unnecessary, and totally distracting at first. Maybe some people really like this kind of full presentation, but as I've said before, I really just prefer one voice telling me a story.

Marc Thompson is a good narrator, but like most male American narrators I find him a little too slick. It always sounds like the voiceover guy from movie trailers. Plus, he did all the voices (or attempted to do all the voices) as impersonations as the characters from the movies. His Obi-Wan Kenobi, Yoda and C-3P0 were quite good, but many of the others left a lot to be desired. Luke Skywalker sounded kinda bored, Lando sounded like he was trying to seduce everyone all the time, all of the female characters were terrible (a pretty common complain when male narrators try to do female voices), and Han Solo sounded like Patrick Warburton (the voice of Joe Swanson on Family Guy, Kronk from the Emperor's New Groove, Elaine's boyfriend Puddy on Seinfeld and Lemony Snicket in the Netflix version of A Series of Unfortunate Events).

Actually Han Solo in this sounds exactly like the Han Solo from the Lego Star Wars cartoons, but that's neither here nor there. 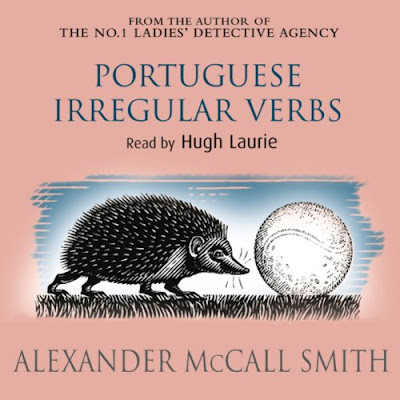 My wife has been bugging me to read this for years, and while I have nothing against it I admit it took me far too long to get around it to. This is my first McCall-Smith book (I've never touched his much more famous No. 1 Ladies Detective Agency, either), and I quite enjoyed it.

Charming is probably the best word I can come up with to describe this book. It wasn't gut-bustingly hilarious (though my wife insists the next book in the series is), but there were a couple of pretty funny moments. The opening chapter about three very un-athletic academics trying to learn how to play tennis using only a 100-year old rule book was brilliant. And then they tried to learn to swim from a textbooks, too... But most of the book is cute, witty, and leaves you with "ah, I see what you did there" moments.

Ostensibly the book is a number of short stories about the lead character, Dr. Moritz-Maria von Igelfeld, a professor of "philology" (study of the history and structure of a language - I had to look it up) whose big claim to fame is writing a 1200-page treatise on Portuguese Irregular Verbs, an incredibly comprehensive (and by all accounts, dreadfully boring and unnecessary) volume about the history and usage of... Portuguese Irregular Verbs. It's a book that all his colleagues appreciate and respect but no on in the right minds would ever want to read. Every chapter and story somehow ties back to this ridiculous book, about how von Igelfeld is trying to get others to read it, or buy it, or how he got the idea to write it, and so on. It's just the right amount of absurd for me, and if you are an academic or know any of them very well, it will entertain you on an whole other level.

My favourite part of the book, however, was definitely the narration by Hugh Laurie. My previous experience with him was reading Three Men in a Boat, by Jerome K. Jerome, which if you recall I was pretty disappointed with (Laurie's reading that is, the book is great). He is a million times better here, taking his time and narrating with a gleeful joy that really makes what could by a dry story far more entertaining. In fact, Laurie's narration here bumps whats would probably be a three-star book for me up to an easy four. 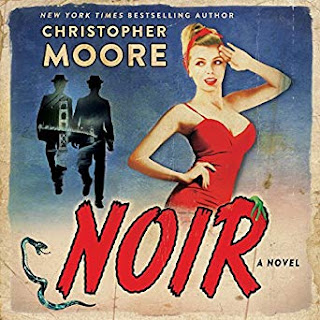 I'm a big homer for Christopher Moore. I unabashedly list him as one of my big influences as a writer (I'm not talented enough to write like Kurt Vonnegut, or British enough to write like Terry Pratchett). Hard-boiled detective stories are also my jam. Mickey Spillane is a dirty pleasure, even though his books are horrifically racist and misogynistic. So when you mash the two of them together, I just knew this was going to be a bitchin' ride.

From the opening line, "She had the kind of legs that kept her butt from resting on her shoes," I was hooked. It was full of Moore-isms like this, where he captures the style and tone of the genre he's satirizing/parodying, but twisting it to make it all his own. It was a classic story of a tough, regular Joe who gets caught up with a crazy dame and some illegal shenanigans, and then all hell (and murder) breaks loose.

Set in post-WWII San Francisco, Moore deftly navigates the racial and social prejudices of the time, being honest about how people thought and acted in the 1940s without being too cringe-worthy for our modern sensibilities. And he touches on a lot of tough points, too. Japanese internment camps, the flourishing west-coast China Town, the Southern blacks who moved to California to build warships, the women who worked to run the country while the men were away but then were shuffled back when the war ended, even the underground but growing gay and lesbian culture. I've read other novels actually written in that period when all of those groups were treated like second-class citizens as best, and manipulative, horrific villains more often than not. The fact that Moore was able to not ignore the racism and bigotry while still making all of the characters real and well-rounded was an impressive feat.

Of course, this being Christopher Moore, there are aliens and secret government conspiracies. Honestly his noir pastiche was so good I would have been happy if he played it straight, without the supernatural elements, but you can't have a Christopher Moore book without talking animals and some kind of otherworldly creature murdering people. It's his gimmick, and bless him for it. I know I love it.

The narrator, Johnny Heller, was solid. He captured the noir/hardboiled vibe wonderfully, and he managed to pull off most of the varied cultural voices without delving too deep into racist caricatures (*cough, cough* Stephen Briggs *cough, cough*). Fun times.