Between my messed up work schedule and new job, I haven't had nearly as much time to listen to audiobooks lately. I have racked up a few over the last two months or so, so I thought I'd share my thoughts now.

Three Men in a Boat by Jerome K. Jerome, read by Hugh Laurie 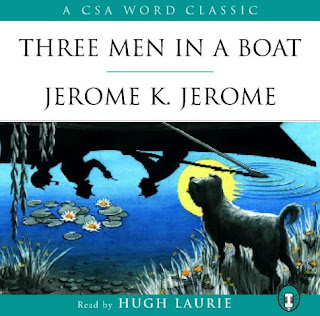 This book came out nearly 130 years ago, and the jokes still work. It's incredible. Sure it's a certain style of British humour that may not be to everyone's taste, but it fits mine precisely. This was obviously an influence on P.G. Wodehouse, and on later modern British authors like Terry Pratchett and Douglas Adams (see below). Originally intended as a serious travel book, the story of three young gentlemen (to say nothing of the dog) getting away from the city for a few days quickly devolves into pure comedy. Some of the passages, like the three men trying to open a tin of pineapples without an opener, or the recommendation of cheese as a travelling companion, had me in stitches. You can still see the origins of the book, though, and there are some beautiful, poetic passages about the English countryside as well as accurate descriptions of places the group visits during their holiday. Many of the locations you can still visit - in fact all of the inns and pubs mentioned in the book are still open today. England loves their old drinking holes, it would seem.

Perhaps the only drawback is that Hugh Laurie (of House, MD fame) is, surprisingly, not a great narrator. He talks very fast and his breathing is very distracting. He rattles off several lines of text in a heartbeat and then takes in huge gulps of air. I know that's his comedy style but it's annoying in an audiobook. He should take lessons from his old buddy, Stephen Fry (also see below). 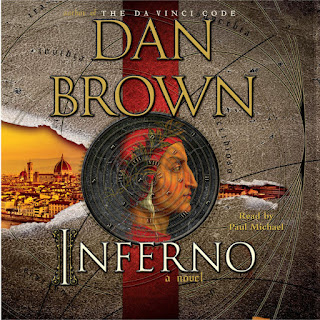 I have a strange relationship with Dan Brown. When The DaVinci Code hit big years ago I railed against it - how could such a poorly-written, formulaic book based on decades-old knowledge for its "shocking revelations" become such a huge success? I even wrote a play about how terrible it was (I was a weird theatre kid).

As time went on, though, I softened on Brown and The DaVinci Code significantly. The book is not that bad, it's perfectly fine and has a great pace. I can't fault an author for his success. If I wrote anything even a fraction as popular and competently written, I would milk it for all it's worth, too. It helped that I went back and read Angels & Demons, which I actually really enjoyed. But then The Lost Symbol came out, which was terrible, so I kinda forgot about Brown and the adventures of Doctor Robert Langdon.

It took me awhile to get to Inferno, and now that I have... eh, all I can say is that it's not as bad as The Lost Symbol, which is barely a compliment. It follows exactly the same formula as the other books: great, page-turning pace; ridiculous, barely-plausible technology; a trusted ally who betrays the hero; "shocking" revelations that really aren't that shocking if you've read a book in the last 30 years; a mad villain who isn't really "wrong," and I'm totally confused if we're supposed to side with him or not.

The villain in Inferno, in particular, was absolutely fucking right, and I think all the other characters realized that at the end because the big revelation of his evil plan was handled with kind of a "meh, whatever." Like, when everyone was trying to figure out how to deal with the execution of his master plan, no one really seemed to care or question what it all meant.

Part of the problem might be that this was an abridged version of the story, so maybe there was some necessary philosophical debate that was left on the cutting room floor. I know the editing also caused other issues as some characters and plotlines disappeared from the story with no explanation.

The narrator was fine. He tried to be really fancy with foreign accents, but my only comment of note is that he's terrible at female voices. He seemed unable to emote when using a female voice, so all the female characters came off bland and emotionless.

Huh, I guess finding stuff to pick apart in a book gives you lots more to write about. But beside all that, my overall review is that the book is "fine," except for one particular line which made me guffaw out loud. At one point, when discussing the female lead's backstory, she said that while in college she took a "part-time acting job to earn extra money." Coming from a theatre background, that's the most ridiculous thing I've ever heard. Unless the job was acting in porn, that should have been the clue to tip the hero off that she was a bold-faced liar (sorry, spoiler).

Hitchhiker's Guide to the Galaxy by Douglas Adams, read by Stephen Fry 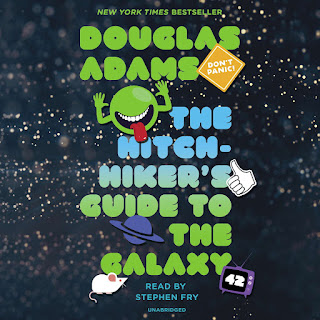 The Restaurant at the End of the Universe / Life, The Universe, and Everything read by Martin Freeman 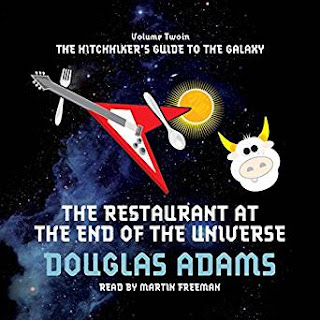 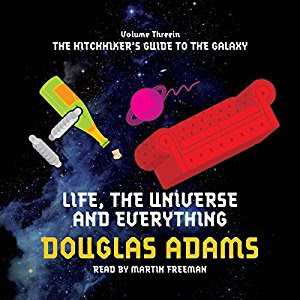 The Hitchhiker's Guide to the Galaxy is one of my favourite books. Its absurd, ridiculous British humour is exactly my cup of tea. If you're not familiar with it, go read it/listen to it immediately. If you don't like it, well, then we can't be friends.

Upon listening to the first three parts (of this five-part trilogy), I've come to several conclusions:
1. Stephen Fry is a much better narrator than Hugh Laurie. I compare them because they're of course former partners in the comedy duo Fry & Laurie, but really, it's not fair to compare anyone to Stephen Fry in the narration department.
2. While Martin Freeman is not as good a narrator as Fry, he IS Arthur Dent. And I'm not just saying that because he played Arthur Dent in the film version of the book; he was obviously cast as Arthur because he embodies the hapless, naive-yet-snarky, everyman quality of Arthur perfectly (it's also why he's great in roles such as Bilbo Baggins in The Hobbit and John Watson in Sherlock).
3. The audio quality of Freeman's books is not great. The gain is too low, it's distorted (because I have to turn it up so loud to hear it) and you can even hear him turning the pages of his script at times. Most of the books I've listened to have had perfect audio, I don't know why this one was so iffy.
4. I think Restaurant at the End of the Universe is my favourite book in the series. Adams really hits his stride here. I won't spoil it, and it takes a bit to set up, but the whole joke about sending all the useless people (including advertising executives, human resources managers and telephone cleaners) into space had me laughing so hard I nearly drove off the road. The best line in the series, however, comes in Life, The Universe, and Everything:


"There is an art to flying, or rather a knack. The knack lies in learning how to throw yourself at the ground, and miss.” 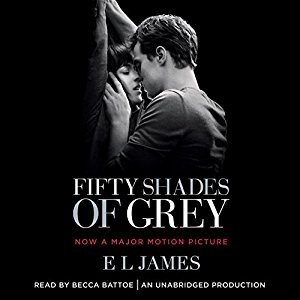 I couldn't do it. I listened for about 2 hours and nothing sexy happened. All I got was terrible, juvenile, awkward prose. I cannot waste 20 hours of my life listening to this.

Is E.L. James 13 years old? Because she writes like she's 13 years old, and the narrator reads her like she's 13 years old. It's maddening. It's like listening to a teenager on the telephone telling her friend about the cute boy she met. Maybe if I was reading it and I could just skim to the sexy parts, it wouldn't be so bad. Except now I'm going to picture the lead as a 13-year old and it will just be creepy and weird. I give up.
Posted by C.D. Gallant-King at 11:22 AM
Email ThisBlogThis!Share to TwitterShare to FacebookShare to Pinterest
Labels: Audiobook, Dan Brown, Hitchhiker's Guide to the Galaxy, PG Wodehouse, Review, The Hobbit