It's been a long time since I did this, but here we go! I haven't been listening to audiobooks in awhile, but I've jumped back in with gusto in the New Year. Here's my rambling and incoherent thoughts on some of the stuff I've pumped into my ear holes these last few weeks: 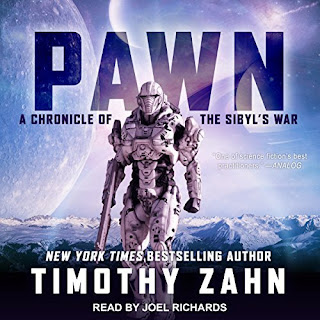 (I actually read/listened to this one almost a year ago. I wrote this review but it's been sitting in "drafts" ever since.)

I'm a big Star Wars fan. When I was a teenager, during the lull in Star Wars films between Return of the Jedi and The Phantom Menace, I devoured all the tie-in novels, games and comics that kept the spirit alive. By far, the best books in those early series was the Heir to the Empire trilogy by Timothy Zahn. I've heard some say that Zahn's books were even better than the original Star Wars trilogy of movies, and I'd be willing to consider that claim.  He has an accessible, well-paced style that works beautifully for genre fiction, and he has a knack for military sci-fi that is unparalleled. He comes up with these tactics and plans that are simply brilliant. Despite how much I loved his Star Wars books though, for some reason I had never read any of Zahn's other works. So when I saw this new book, the start of a new series, pop up in my audiobook feed, I thought I would finally give it a shot.

This is not Star Wars. It has none of the sweeping, epic mythology of Star Wars, nor any of the military or espionage that Zahn is famous far. It's a story about a small group of humans from our modern day Earth, abducted by mysterious aliens and put to work on a massive, equally mysterious spaceship in the middle of nowhere. Though they do encounter an odd alien here and there, the main thrust of this story is about the protagonist interacting with the other displaced humans as they go about their daily routines. It's an odd sort of setup for what is ostensibly supposed to be a sci-fi adventure, but a setup it is, as the truth of the ship and the aliens and the hero's purpose are all revealed in the last chapter or so. This is very obviously the beginning of a much longer series - it could have equally have been the first half (or even third) of one of those big doorstopper books that fantasy and sci-fi tend to favour.

That said, the story is well told, and the main character, though frustrating at times, is one I can root for. I've heard complaints that she's passive and weak, especially at the beginning, but that's rather the point. She's a young woman and an addict who grew up surrounded by abusive relationships and was a lackey for a street gang - it takes her awhile to overcome this background and grow into a more confident, assertive person - and even a leader - by the story's end. 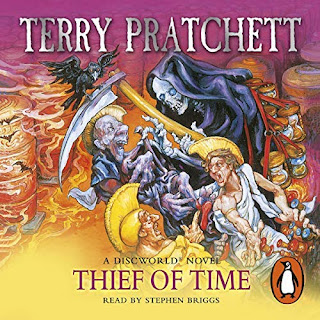 I love Terry Pratchett. I don't need to go to that in depth right now (though maybe I should write a full post about him one of these days). I listened to two of his books last month, one of my favourites (Guards! Guards!) and one I actually hadn't read before (Thief of Time).

They are two very different books. Thief of Time is very good, dealing with more esoteric themes (the nature of time and existence), and has a mixture of some of Pratchett's best characters (Death and Susan Sto Helit) as well as some that only ever appear in this book (The History Monks). The Auditors (other-worldly god-like beings that are basically celestial accountants) are trying to destroy the human race for being unpredictable. The History Monks, an ancient order of Shaolin-like monks charged with protecting the flow of time and history, work to stop them. Meanwhile, Death tries to get the Horsemen back together (who have gotten old and lazy) to ride out for the upcoming Apocalypse. Through it all, Death's granddaughter, the school teacher Susan, is just trying to put it all back together and save the universe.

I really enjoyed it, and the character of "The Sweeper," Lu Tze, could be an all-time best Discworld personality up there with Rincewind and Captain Carrot, but this audiobook version was seriously hampered by some of narrator Stephen Briggs'... unfortunate choices. Briggs read all of the History Monks' voices with awful, stereotypical Chinese/Asian accents, sounding like Mickey Rooney in Breakfast at Tiffany's or the waiters at the end of A Christmas Story. It was painful. Worse, there are so many different monks, and Briggs tried to use different voices for all of them... it was just bad. It was also inconsistent, and he regularly dropped in and out of the voice for some of the main characters. I cringed every time one of them spoke. I know Briggs has read many of the Discworld books and he has many fans, so I really hope the next one will be better. 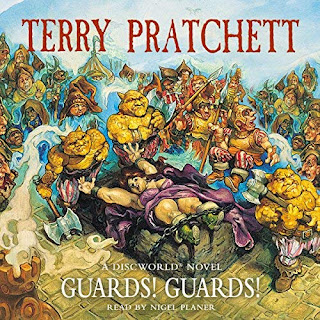 On the flip side, Guards! Guards! is easily one of Pratchett's best books. It introduces the Night's Watch, the hapless, foolhardy police force of the capital city, one of the Discworld's best continuing storylines. It's like Brooklyn Nine-Nine in a medieval fantasy city. I also realized upon revisiting this for the first time in years that Guards! Guards! also introduced a number of classic Discworld tropes, such as the fact that a last, desperate, million-to-one shot always succeeds (and thus the characters will try to purposefully make their tasks harder to get them as close to a million-to-one as possible), as well as that the concentration of knowledge in libraries is so powerful that it opens up portals to alternate dimensions called L-space. Both are important plot points in this ridiculous story of an incompetent police squad investigating murder by dragons.

Narrator Nigel Planer is superb, absolutely nailing the voices of some characters like Corporal Knobs and Sergeant Colon (Colon sounded exactly like Brendan Gleeson, and now I want to see Gleeson play the bumbling Sergeant in a movie version). His Vimes and Carrot were not what I expected, but they really grew on me over time. All that said, the sound quality of the recording was terrible - the volume constantly went up and down, and there were numerous obvious cuts and edits in the track. I don't know if this was the fault of Planer or the producers, but I would have expected better in a professional-level recording. 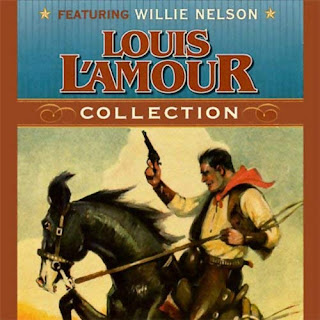 I grew up in a house full of Louis L'Amour books. He is my father's favourite author, so I seem to have been drawn to him by some kind of conditioning or osmosis.

I haven't read many westerns outside of L'Amour, but he is a perfectly competent adventure writer, capturing the feel of the old west (or what is stereotypical in popular fiction as the "old west") in a easy, well-paced style. This collection contains about ten short-stories, and even with this small sample they get a little repetitive (how many stories can you write about stealing cattle and jumping land claims, anyway? And this collection features at least two stories about mistaken identity) but that being said, the fact that the man wrote hundreds of novels and short stories with any variety at all is incredibly impressive.

I've said it before and I stand by it - the only difference between westerns and romances is how much punching is involved. There's always a love interest, the leads are always described the same way in both, and both usually feature horses. But after listening to this batch I was also struck by how similar westerns are to sci-fi (I kinda knew it already, but this one really stood out for some reason). In any of these stories, you could have easily replaced the hero with Han Solo or Malcolm Reynolds, swapped the six-shooters for lasers and horses for spaceships, and *poof* instant space opera.

Willie Nelson is (perhaps surprisingly, perhaps not) an excellent narrator. He doesn't have that polished sound that most American narrators use, which is a plus in my book, and he doesn't go in for fancy voices and accents. But he is a fabulous storyteller, with a warm, down-home voice that really draws you in. It's like listening to a smiling grandpa or uncle tell you a story, which is not a bad thing. There's a reason Nelson is one of the most beloved and celebrated entertainers in America.

Two of the stories also featured full casts, scores and sound effects, making them full-on audio dramatizations, like old-time radio plays. I was honestly kinda ho-hum about this; generally I just prefer my audiobooks being one reader telling me a story, even if they're doing a bunch of silly accents. While I also enjoy radio plays, I feel like that's a different genre/style altogether, and borrowing so much for what is ostensibly an audiobook feels like trying too hard. That being said, one of the stories features a star-studded cast with voices provided by the likes of Kris Kristofferson, Johnny Cash and Waylon Jennings, so that was kinda neat. And the other story featured one guy who sounded EXACTLY like former pro-wrestler Stone Cold Steve Austin, though I can't find credits for the story anywhere to confirm whether this is true. I even asked Steve Austin himself on Twitter about it, but he didn't get back to me.

Posted by C.D. Gallant-King at 12:30 AM
Email ThisBlogThis!Share to TwitterShare to FacebookShare to Pinterest
Labels: Audiobook, Discworld, Review, Terry Pratchett