IWSG November: It's a Spectrum

You may recall from last month I was feeling pretty good and hyped about writing. Actually, I'm sure you don't remember, but you can read about it here, if you like. Anyway, some of that luster has come off in the last 30 days. I'm not saying I've switched a full 180-degrees and am now wallowing in self-loathing, insecurity and depression, but I've definitely slipped a few notches on the excitement spectrum.

Editing on Hell Comes to Hogtown has not progressed as well as I had hoped thanks to normal life busy-ness. I have done quite a bit of work outlining my next projects, which is a good thing, but neither are quite ready to be dived into yet. I was hoping I would be farther along with all of those things, especially Hogtown, by now, but it was not meant to be.

I am not participating in NaNoWriMo. I'm in a pretty good place with reasonable writing habits so I don't need it for that reason, and I don't need to do it to prove anything. I know I can write 50,000 words in a month, and I don't need to do it right now. Pushing myself to try would just be unnecessary stress. Right now I'm in revising/outlining mode, which for me is much harder than racking up word count. I don't need a special month as an excuse to vomit words into my computer. I am quite capable of literary regurgitation, thank you very much.


So good luck and godspeed to all my fellow writers out there, but know I will be watching you from the sidelines this year.

The one thing that saved the month for me and put a little boost back into my step was the release of Tentacles Under a Full Moon on October 31. I didn't mention it during last month's IWSG post because at the time I had no idea when or if I was would actually put it out. It was the story I wrote as a joke in response to an episode of The Grim Tidings Podcast (which, if you're a fantasy fan you should totally be listening to). I thought it turned out pretty well though, and I needed something for the Halloween blog hops I had signed up for - thanks again to Patricia Lynne and Wittegen Press for setting those up - so I hired someone to do a quick edit on it, slapped on cover on that baby and made it available to the world.

I actually got more downloads of the story in 2 days that I've got of Ten Thousand Days in almost 6 months, but to be fair it WAS free (though 3 people bought it, for some crazy reason). It's now available for only 99 cents US pretty much anywhere ebooks are sold, but if you want a review copy let me know and I'll hook you up. So far the only feedback I've received is that it's "crude," "funny," "weird," and "depressing." For the record those are all things I was going for, so I take those as compliments. 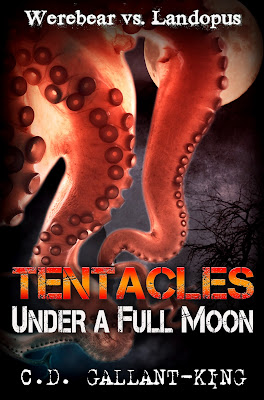 So yeah, all-in-all, I'm feeling okay, and I would feel even better if you check out my story. ;-)
Posted by C.D. Gallant-King at 12:01 AM
Email ThisBlogThis!Share to TwitterShare to FacebookShare to Pinterest
Labels: Editing, Hell Comes to Hogtown, Insecure Writer's Support Group, IWSG, Ten Thousand Days, Tentacles Under a Full Moon, Writing