How to Write a Classic Story: Buy a Bear 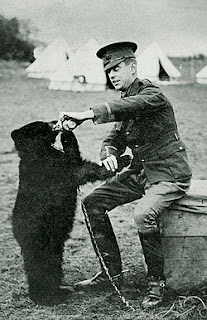 That's an actual entry in the diary of Harry Colebourn, a Canadian soldier from Winnipeg who was travelling to Valcartier, Quebec to undergo training on his way overseas in 1914. He bought the female bear cub from a hunter who had killed the animal's mother. Now, Colebourn was a veterinarian by trade and I could absolutely understand him wanting to take the animal from some weirdo random hunter, but he then proceeded to take the bear with him to training camp.

Even better, when Colebourn shipped out to England... HE STILL KEPT THE BEAR. It became his unit's unofficial mascot.

I've never served in the military and I don't know a whole lot about army practices and regulations, even less about those in effect during World War I, but I had no idea they were so cool about their soldiers keeping giant wild animals as pets. I mean, were people back then so badass that no one was worried about A FUCKING BEAR wandering around their base? And no one thought it was odd when the dude brought the thing with him ACROSS THE OCEAN to hang out with him in England? I mean, I would imagine if a soldier asked to bring his dog with him that would be a flat-out no. But a bear's okay?

You're probably wondering where I'm going with this and what this has to do with writing, so stick with me a moment (if you haven't figured it out already).

Colebourn wasn't a complete jerk; when he shipped out to France he finally decided to leave the bear behind. Apparently the trenches at the front line were not the place for a bear cub, though I'm sure if she had been full grown they would have slapped some armour on that bastard and brought it along.

He left the bear at the London Zoo, where it became a favourite of guests, in particular to an aspiring writer and his young son, who loved the bear so much he named his teddy after her. Did I mention that Colebourn had named the bear "Winnie" after his hometown of Winnipeg? It all makes sense now, right?

A.A. Milne wrote the Winnie the Pooh books for his son, Christopher Robin, based on his toy bear that was in turn named after a real bear that Major Colebourn irresponsibly dragged halfway around the world.

(For anyone who caught that, yes Colebourn was eventually promoted to the rank of major despite  - or maybe because of? - the fact he irresponsibly dragged a bear halfway around the world.)

So what is was my point in this ridiculous story? My point is that A.A. Milne became famous because some dipshit bought a gawd-dang bear off a crazy hillbilly in a small town in backwater Ontario. That, my friends, is the secret to literary gold. Ursine trafficking.

So if you too are an aspiring writer, if anyone ever offers to sell you an orphan bear cub, snatch that up right away and wait for your book deals to start pouring in.

Or, alternately, I'll become famous writing about you getting eaten by a bear. Either way, someone wins.

My new story Tentacles Under a Full Moon - now available here - doesn't have anything to do with Winnie the Pooh, but it does contain a giant murderous werebear, which is probably much better.
Posted by C.D. Gallant-King at 5:30 AM
Email ThisBlogThis!Share to TwitterShare to FacebookShare to Pinterest
Labels: #MondayBlogs, Animals, Canada, History, Werebear vs Landopus, Winnie the Pooh, Writing