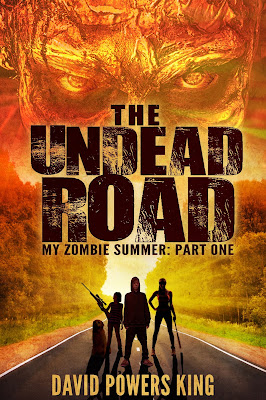 Today I'm turning the blog over to Mr. David Powers King (no relation to yours truly) to reveal his awesome-looking new Zombie novel! I gotta say, I'm kinda disappointed this one won't be coming out until the New Year, cause I love me some flesh-devouring undead over the holidays.

So without further ado, take it away, David!

THE BOOK!
Nothing brings the family together like a zombie apocalypse …

Fifteen-year-old Jeremy Barnes would rather watch a zombie movie than shoot a real one, but he has no choice if his family wants to survive the end of the world. Their plan? Drive across the infected United States to a cabin in the Colorado Rockies without a scratch, but their trip takes a complicated detour in the middle of Nebraska when they find Kaylynn, a girl who can handle a baseball bat better than Jeremy can hold a .45 Berretta. And when they stumble into a sanctuary, Jeremy soon learns that Kaylynn is stronger than she looks—a deadly secret lies inside her.

After the radio picks up a distress call from Kansas City about a possible cure, Jeremy’s parents go with a team to investigate. They never return. The only way to find their parents is for Jeremy and his sister Jewel to rely on a dangerous girl who might just turn on them at any moment.


THE DETAILS!
Title: The Undead Road: My Zombie Summer: Part 1

THE CONTEST!
A while ago, David invited the blogosphere to let him turn one unfortunate lucky contestant into a zombie for The Undead Road. The winner was Ilima Todd, who is now the awesome author of Remake. The next installment of My Zombie Summer is underway, and David wants to do this contest again. Want to be in a zombie book? Not only is this your chance, but it is your choice!

Between now and next Wednesday, send an email to dpowersking [at] gmail [dot] com, with the subject line: Zombify Me! Contest. In your email, David wants you to tell him three things:

1: The name you will be identified as (example: your first name).
2: A description of yourself—the more detailed you are, the better.
3: How would you like the survivors to put you out of your misery?

Four casualties contestants will be chosen on Wednesday, November 25th. The most inventive or interesting entry will be zombified! The other three who are unlucky fortunate enough to survive will be given special honors. Winners will be announced on December 2nd on David’s blog.

Prizes? The winner will be zombified in the pages of My Zombie Summer: Part Two, receive a signed proof of the novel (when it’s ready), and a $20 Barnes and Noble gift card. The runner ups will receive a free ebook of The Undead Road for their Kindle (other platforms TBA).

Thank you for participating, and good luck!

THE AUTHOR!
David Powers King was born in beautiful downtown Burbank, California where his love for film inspired him to be a writer. He is the co-author of the YA fantasy novel WOVEN, published by Scholastic. An avid fan of science fiction and fantasy, David also has a soft spot for zombies and the paranormal. He currently lives deep in the mountain West with his wife and three children.