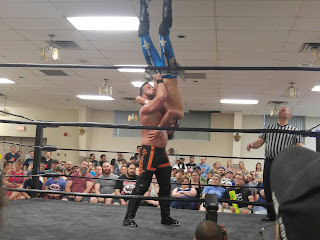 Hey it's time for my monthly pro-wrestling post that no one is going to read! ☺

This past Saturday I headed down to the local Knights of Columbus hall with my father-in-law to check out our local indy wrestling promotion, Capital City Championship Combat (C*4 for short). It was a night of laughs, thrills, poutine and watching athletic young men try to kill themselves for the enjoyment of a handful of people.

Now, those of you with limited knowledge of pro-wrestling have likely heard of World Wrestling Entertainment, also known simply as WWE, and formerly the World Wrestling Federation (which was changed to avoid confusing all those poor pandas). 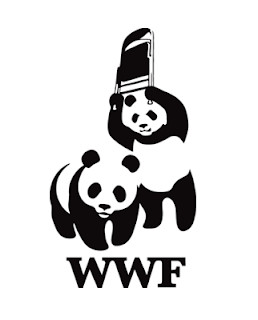 Any excuse I can find to use this image.

What you may not know is that not all pro-wrestlers compete for this huge, billion-dollar multi-national corporation, because WWE is not the only company in the business, not by a long shot. Not only are there several other companies in the US alone with major TV deals (including the incredible Lucha Underground, which is available on Netflix!), but there are literally hundreds of smaller companies operating across North America, running local shows in high school gyms, barns, parking lots, bars, circus tents, veteran association halls and yes, even church basements and the Knights of Columbus. Basically anywhere you can squeeze in a wrestling ring.

These small, often low-budget affairs feature a wide range of talent, ranging from pasty, awkward kids with no training up to international stars who are considered by those in the business as some of the best performers in the world. Not to mention washed-up stars from yesteryear, guys who were on TV for the WWF back in the 80s, now in their 60s, still making the rounds and trying to make a payday on their past glories. Who shows up all depends on what the promoter can afford and what the audience is willing to pay. 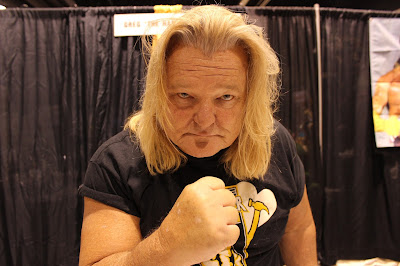 Greg "The Hammer" Valentine, who was WWF Intercontinental Champion in the 1980s, now 65 years old and looks like he died ten years ago. He wrestled as recently as last month and has matches booked through the summer. Has anyone seen Mickey Rourke in the "The Wrestler?"

Some small towns run shows with just local kids who barely know how to fall without hurting themselves in front of audiences of a dozen people. In big markets like Los Angeles, some of these "independent" shows gain cult followings, drawing thousands of people and even attracting big name celebrities to the audience. In every case though, the local Saturday night wrestling show is a cultural event, a special attraction that draws a certain community together. In that way it's like any sport or performance, except the audience is very small and very niche. Those who love it adore it, and those who don't think it's stupid. It's like a lot of obsessive fandoms in that way.

C*4 Wrestling in Ottawa runs monthly shows in front of packed houses of 300-400 people. The wrestlers are usually on the higher end of quality, featuring mostly local talent from Eastern Canada and the North Eastern US, we're just lucky that most of those guys happen to be pretty good. They also sometimes bring in bigger names or guys on the cusp of hitting in big, like Kevin Steen before he became world champion Kevin Owens in WWE, or The Young Bucks just as they were becoming an international sensation and a mainstay in Japan. 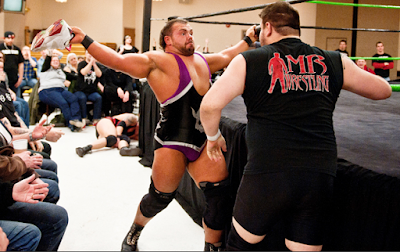 The aforementioned Kevin Steen, about to be hit in the face with a fan's shoe by Michael Elgin at C*4 Wrestling.
Photo credit: Ottawa Citizen

Because the small hall is so packed, the wrestlers often end up right in the audience faces, and if you're sitting in the first four-or-five rows you have to be constantly on the alert to jump out of the way if a wrestler falls (or jumps) out of the ring into your lap. It's all part of the charm. The guys in the ring are working hard to entertain the audience, whether through jokey comedy bits, high-flying, gymnastic acrobatics, or old-fashioned tough-guy slugfests. Because it's so intimate the wrestlers can interact more directly with the crowd, playing with them and off them, and it's a very different experience than watching it on TV or even live in an arena with thousands of people.

You thought I was kidding about people nearly killing themselves?

My father-in-law and I love hitting the show when we can because it's a chance to get out of the house and have a laugh and a fun night out for just twenty bucks plus the price of french fries. It's way more intimate and entertaining, for significantly less money, than going to a WWE show or an Ottawa Senators game. And how often in an NHL game do you have a sweaty player land in the seat next to you, stop to take a selfie, then hop back on the ice to keep playing without missing a beat? 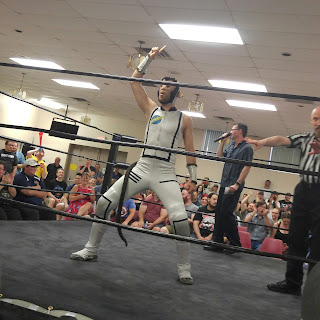 Also, the NHL doesn't have Space Monkeys.
Photo Credit: Me

I'm not going to convince anyone who thinks wrestling is stupid to become a fan with this post, But I will urge you, if you ever get a chance to watch an independent wrestling show at your local high school or bar, consider taking a chance on a different kind of night out. Independent pro wrestlers are much like independent musicians, writers or stand-up comics - they're just regular people, trying to live their dream and make a living doing something they love. They're not making big money but they love entertaining their fans, and some are very, very good at what they do. Give them a chance. I promise they will literally put their bodies on the line to show you a good time.


Posted by C.D. Gallant-King at 12:30 AM
Email ThisBlogThis!Share to TwitterShare to FacebookShare to Pinterest
Labels: C4 Wrestling, Canada, Wrestling