The Real Origins of Canada

The history of Canada begins with the arrival of the first nomadic aboriginal peoples somewhere between 50,000 and 17,000 years ago to the Northern extremes of the Alaska and the Yukon. They were unable to move any further south due to glacial ice. By 16,000 years ago, the ice had receded enough that these Paleo-Indian people were able to migrate further south and populate the continent. Most of them continued their hunter-gatherer ways, but a few settled down to more permanent communities. For example, a recently-discovered site on the Haida Gwaii islands (formerly Queen Charlotte Islands) in British Columbia may be the oldest inhabited site in Canada. Ruins found off the coast indicate that people lived there at least 13,700 years ago. 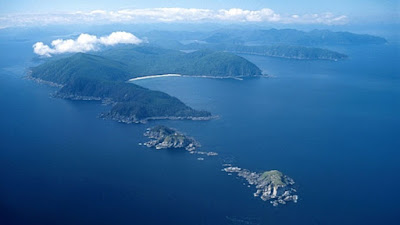 Well, sort of. We'll get there, but as usual with these stories, it's going to get pretty bleak.

The islands of the Haida Gwaii archipelago were much larger thousands of years ago, which explains why the ruins are currently underwater. It was also probably attached to the mainland, which explains how the Haida ended up there in the first place. The ancestors of the Haida were the Koryaks, a nomadic people who originated in Russia and traveled across the Bering straight during the last ice age. The Koryaks practiced a form of Raven animism that evolved into spiritual practices still followed by the Haida today. The Haida also developed their own distinct language as well as a complex class system consisting of two main clans: Eagles and Ravens. Links and diversity were gained through marriage between the clans. This system was also important for the transfer of wealth within the Nation, as the two clans were reliant on each other for the building of longhouses, totem poles and other items of cultural importance. 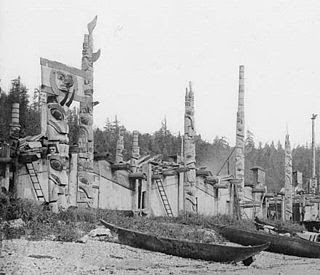 The Haida were a seafaring, matriarchal society. Their nation comprised some 100 villages in the Islands and were noted traders, developing trade routes with other First Nation tribes on the mainland as far south as California.

First contact with Europeans came in the 1770s, and as usual ruined everything. Haida Gwaii became an important part of the fur trade and the gold rush through the 18th and 19th centuries, and its "ownership" was disputed between the British and America. The Haida seemed to put little stock in these European claims, however, and like most First Nations alternated between helping and hindering the Colonials. The Haida were not to be trifled with at sea, though, and sunk or captured numerous European ships during this time. It was searching for the wreck of one of these ships that scientists discovered the ancient Haida site I previously mentioned. 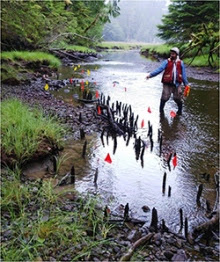 The Haida Gwaii islands themselves have been called by some the "Galapagos of the North," due to its unique climate and terrain. Thanks to its isolation from the mainland and favourable coastal winds, it has developed a distinct biocultural zone with many endemic (unique) plants and animals, including subspecies of black bears, otters and bats, as well as the Nootka cypress, western hemlock, and Sitka spruce not seen on the mainland. 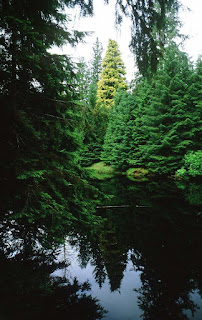 One famous sitka-spruce in particular was the Kiidk'yaas ("Ancient Tree" in the Haida language, or the Golden Spruce), a one-of-a-kind 300-year-old spruce with a rare genetic mutation - a lack of chlorophyll in the tree's branches caused it to take on a striking yellow-gold colour. According to Haida mythology the Kiidk'yaas came about when a young boy disrespected nature and caused a terrible storm to descend on his village. When he and his grandfather fled the village, the grandfather warned the boy not to look back. The boy disobeyed, and was immediately turned into the Golden Spruce where he stood. The Haida people said the tree would stand to be admired until the last generation.

Kiidk'yaas was cut down by an unemployed engineer, Grant Hadwin, as a protest against illegal logging in 1997 (see, I told you we ruin everything). Hadwin was arrested and released on bail, then disappeared while trying to paddle his kayak 100 kilometres to the mainland in the dead of winter. The remains of his kayak were discovered later that year, though Hadwin was never seen again. I'd like to think that Mother Nature meted out her own revenge.

Of course, Canada hasn't completely ignored the very first people of these lands. They may not always treat them well, but at least they don't pretend they don't exist. Usually. The artwork on the back of the old Canadian $20 bill (the one before our current plastic space money) actually featured artwork by a Haida artist, Bill Reid. The image on the far left is of Raven and the First Men (which is actually pretty cool so I'll blow that up below), and the prominent image on the right is Spirit of Haida Gwaii, a massive bronze sculpture that sits outside the Canadian embassy in Washington DC. The background also depicts traditional Haida imagery. 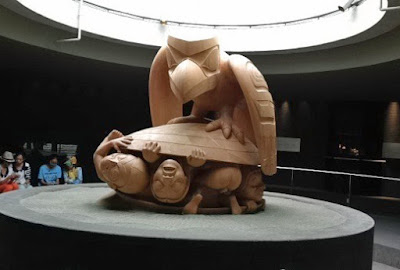 All that is pretty cool, except that the imagery was changed with the advent of the new bank note series in 2012. Now the $20 bill depicts the Vimy Ridge Memorial, which is an important event to remember, but it's also a memorial to white people fighting other white people in another country.

Anyway, Haida Gwaii remains an amazing and fascinating piece of Canadian history, as well as an unprecedented link to the past. It is a popular tourist site for both these reasons as well as its unique natural environment. It is a definitely a place we should strive to protect, learn from, and if we can, visit to experience it ourselves. Especially before it gets sucked into the Pacific by an earthquake.