Made to Suffer: Season 2 Episode 1

On Friday night we launched a new RPG campaign, the first in a long time. This time around we're running "Zombie-World" by AJ Ferguson, a hack of Dungeon World, which itself is a variant of Apocalypse World.

Anyway, the game system is not that important for our purposes here (I'm sure I'll talk more about that on Rule of the Dice in a couple of days). Right now what I want to concentrate on is the story. The Apocalypse World series of games is very much a story-driven system; it encourages the players to build on the world and drive the plot and the action. This is in contrast to many game systems where the game world is entirely created and manipulated by the Game Master and the players are along for the ride.

Our group, being far more familiar with the latter style of game, took a bit of getting used to in this new open-world format. But we are getting the hang of it, and it was a lot of fun. We told a story, and it was wild and wacky and worth recording here, I think, for my own future benefit if nothing else.

For those keeping score, this story is roughly set in the same world as my previous zombie games, just several months later, long after civilization has fallen and the survivors are struggling to make sense of the crazy new world. Our group is holed up in a city (which city exactly is unimportant - it could be almost any major city in North America) and they're just trying to survive day-to-day.


The Cast of Characters

Andrew "Mac Truck" Feldman - An escaped inmate, he was serving time for white collar crime, but his prison stay actually turned him into a harder, more dangerous individual. The hard lessons of prison prepared him for surviving the apocalypse. A huge muscular man who uses a pickaxe as his weapon of choice.

Chibi - A Goth chick with a samurai sword, she uses her charms and wits to survive. She's gotten by letting others do all the dirty work for her and if she can't find someone to do manipulate she will usually prefer to run and hide from a fight.

Dusty and Oswald - Two grumpy oldtimers who both think they know everything and think the other knows nothing, these two burly grumps are quick to provide advice to everyone whether asked or not. Both are flustered by young Chibi, and she takes advantage of it.

Bubba McMahon - A police academy student when the zombie uprising hit, Bubba has no trouble telling people he was a lawman even though he probably never officially wore a badge. He's not quite right in the head, and grows ever creepier as the days and nights go by. His entire body is covered in tattoos, and he keeps adding more, often prison-style and drawn by fellow survivor Mac Truck.

Trevor - The most average and boring man on the planet. He can become invisible simply by standing in a crowd. His only distinguishing feature is "he used to drive a truck" though he is annoyingly positive and is good at cheering on the other members of his team. He also develops a weird overly-friendly relationship with Bubba that everyone is pretty sure is going to end with Trevor on Bubba's plate. 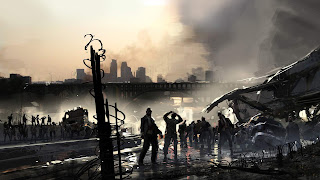 The group is hunkered down in a warehouse trying to determine what to do about their dwindling supplies when the quiet night is shattered by gunshots. A young man is being chased through the streets nearby, firing a weapon wildly and drawing great attention to himself. They consider leaving him to his demise but Chibi convinces the old men to go get him and see if he has anything good on him. Mac Truck, Bubba and the Oldtimers head outside to fight off a couple of zombies and grab the kid, but Trevor and Chibi head to the roof to discover that the noise is attracting a large hoard of zombies.

Bubba attempts to question the kid but he's hysterical and ends up trying to shoot the lawman - fortunately his weapon is out of bullets. Bubba beats him unconscious and drags him into a back room to further interrogate him. Meanwhile the zombie mob converges on the warehouse and the group tries to determine how to escape. Trevor tries to burn the zombies and inadvertently lights the front of the building on fire.

Help arrives in the form of a school bus full of armed survivors who offer help if the group can get past the zombie mob. As they're escaping, Oswald goes to the back room to get Bubba and sees the kid's mutilated corpse - it looks like Bubba had been eating him. Without time to deal with Bubba's cannibalism, they fight their way through the zombies. Trevor is wounded and nearly bitten, but Bubba goes back to help him and carries him out.

The group makes it to the bus and the leader - a soldier named Corporal Thompson - demands to know where Samuel is. They quickly determine that Samuel is the kid they beat up and left behind, but lie and say they never saw him. The group convinces Thompson to take them back to her refuge (mostly thanks to Chibi getting cozy with one of the young men in the group and convincing him to vouch for them).

The leader of the other group is a Doctor Theodetos, who immediately recognizes Samuel's bag among the group's possessions. The again lie and say they just found it. The Doctor says he wants to believe them and offers them a deal - if they can head out on a supply run and bring back some good provisions for the group to share, he will know that they are trustworthy.

A woman in the group - Samuel's sister Anastasia - also recognizes the bag and is very distrustful of the newcomers. Trevor and Ozwald give her the recognizable patch off the bag back, but she still seems to have it out for them.

The next morning the group sets out to check the nearby refuge of another group of survivors that was recently overrun. Dusty stays behind due to severe diarrhea, and to see if he can learn anything about the group. On the way they find a station wagon full of supplies, but are wary of a trap. They're about to walk past when Trevor tries to slash the car's tires to keep them from following, and gunshots ring out from a nearby building. Oswald and Mac Truck charge the shooters, bringing one of them down but the other escapes. Oswald tries to incapacitate their assailant but Mac Truck doesn't hesitate to crush his head with his pickaxe. The group has to flee, leaving the supplies as the noise of the battle attracts wandering zombies.

The group finds the refuge, a townhouse that appears to have been overrun by zombies. They split up and Trevor is once again nearly eaten by a zombie but saved by Bubba. The young Everyman falls deeper under the creeper's spell. The rest of the group encounter a massive, 300+ pound zombie in the basement that Mac Truck dispatches gruesomely with a chainsaw they found upstairs.

Grabbing what they can, the survivors return to camp to share their spoils. Doctor Theodetos is pleased to have such a great windfall, and praises the group for their generosity. Most of his people share that opinion save Anastasia, who still suspects they had something to do with her brother's death, and Corporal Thompson, who seems to have some other schemes on her mind.

Not to mention they know there are other survivors out there who are not afraid to ambush their fellow humans, and one of them got away to tell his friends...