Made to Suffer, Season 1 Episode 4 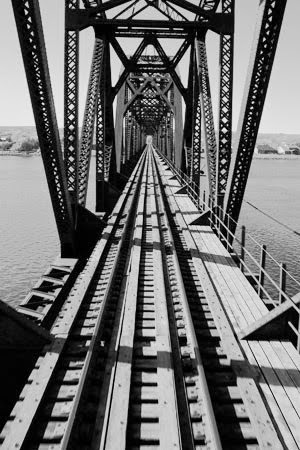 The following is a dramatization of the closing moments of our role-playing game session from this past Friday night. I didn't even really "dramatize" it very much - it pretty much happens exactly as you see here. I just had to record it for posterity because it was perhaps the most perfect few minutes of gaming I've experienced in a long time.

If it reads like the closing moments of an episode of The Walking Dead, that's just about right. The whole session felt an episode of the show. Moving along slowly, in-group bickering punctuated by a few flurried moments of zombie encounters... all leading to a shocking climax out of left field.

Without living with these characters in their world for a few weeks I don't know if it will have the same impact, but those of us who were there certainly enjoyed it.

A chill icy wind blew in across the Liberty River. Winter was coming, and when the snow hit an already shitty life was going to get a whole lot worse.

Three men trudged across the elevated tracks of the blue line between Addison and Division stations. Below them a few zombies shambled aimlessly through the deserted streets. One looked up and a low, strangled moan escaped from its bloody rotting lips. A second and third followed the first's blind gaze, but the shuffling dead were too stupid to figure out how to get to their elevated prey and did nothing but point and groan uselessly.

The three men were the last remaining survivors of a much larger group - almost 20 at one point - who had struck out two days ago in a desperate attempt to escape the city. They had been holed up in a subway station for nearly two weeks, until the food ran out and they had no choice but to come up to the surface. The world above had changed drastically. The city was overrun by the mindless, flesh-eating risen dead, and though there were supplies and food to be had they were often too dangerous to retrieve. Just crossing the street was taking your life into your hands. They picked up a few more stragglers along the way, but many more died, and soon only three brave, tired souls were left to try and cross the bridge across the Liberty River into the figurative world of Freedom.

The oldest, a man they knew only as Church, took up the rear. A surprisingly fit and tough vet who was old enough to have fought in Vietnam, he had gotten banged up bad during the escape and was limping heavily. His weathered face was dark with the shadows of what he had witnessed, and his eyes were heavy with loss. Somehow he had survived the last two weeks on the streets alone, but his knowledge of the area had proven invaluable at finding a route to safety. The other two survivors owed Church their lives.

The youngest, walking just ahead of Church, would not have been described as a "man" just a month ago but had grown up fast in the last few weeks. Noah was not quite 16 years old, but he had seen and experienced things getting out of the city far beyond his years. He was quick and wiry and good at getting into and out of tight spots, but he was not handling the trauma well. He had shakes and sweats and was constantly looking over his shoulder - he stayed close to Church both for protection and because he was concerned for the old man.

Leading the pack and barely waiting for the others to catch up was Hank, who called himself "The Tank." A giant of man - over three hundred pounds - he was not quick or smart but he was tough and absolutely ruthless. Many survivors had died due to Hank's actions - and inaction - but somehow he had survived it all when better men and women had fallen. And Noah had survived by sticking close to him. The blood-caked Heckler & Koch submachine gun slung over his shoulder was a perfect symbol of his brutal determination. He had charged the original owner and wrestled it away from him, killing two bystanders in the process when the weapon went off. After running out of ammo, Hank continued to use the gun as club, beating zombies to death when he had to and running when he could, often leaving his fellow survivors behind to fend for themselves.

The broken table leg in his hand, studded with rusty nails, was also a pretty good symbol for how he got the job done.

"Wait," Church called out from the rear, his voice gruff and pained.

"I just wanted to thank you," Church said, which finally caused Hank pause. "When I met you I didn't know if I could trust you. And I was right, you are a bastard, but I couldn't have gotten out of here without you. So I just wanted you to know I appreciate it."

Church extended his hand to the big man.

Hank hesitated a moment, then walked straight back toward Church. A hint of a smile appeared on the old man's face - the first they had seen since they met him.

Hank raised his makeshift spiked club and smashed Church square in the face.

Noah gasped as the old man crumpled in a heap on the tracks. Hank merely turned and started walking away. "What the hell did you do that for?" the kid screamed at The Tank.

"He was bit," Hank said, without emotion. "I saw him trying to clean it in the restroom when I went to fill my water bottle. He was going to turn and come after us."

"But he... but he... he helped you!" Noah fell to the old man's side. His face was a bloody mess, the skin peeled back across his forehead. One of his eyes was destroyed, punctured by one of the club's nails.

"He was bit," Hank said again, and kept walking.

"We can't leave him here! He helped us!"

Hank stopped. He half-turned back. "So finish him off."

Noah was quiet. He sat frozen with fear by old man's side, unsure of what to do. Church continued to groan.

"Goddamn it," Hank grumbled, and stormed back toward them.

Church surprised The Tank when he came at him with a knife. Whether it was from adrenaline, desperation or years of training, Church still had fight left in him despite his wounds. Rising to his knees he stabbed at Hank's ample guts, but his blade struck the bloody gun slung over The Tank's shoulder and snapped. Hank tried to swing his club but Church caught his wrist. The two men struggled for advantage a moment but Church was fighting a losing battle. Between his injuries, fighting for his knees and Hank's massive weight, the old man had little hope. He had only one chance and he had blown it. Hank put his boot on Church's chest and kicked him off, sending the old man back onto the rails.

Noah stared in petrified horror as Hank the Tank raised his club again and brought it down on Church's head. There was a sickening crack and Church moved no more.

The kid watched silently as a heavily-breathing Hank wrenched his club away, flicking spatters of blood, skull and brain matter across the tracks. He shook the weapon briskly to dislodge a particularly clingy hunk of scalp. Blood poured from the gaping hole in Church's head, dripping down through the rails and through the viaduct onto to the streets somewhere below. Hank quickly checked the dead man's pockets, finding nothing of use. He left the broken knife.

"He was bit," Hank said a final time, wiping sweat from his brow. He turned to walk away once more.

"You coming?" Hank called a moment later, already a hundred feet away.

With nothing else to do, the kid stood up and slowly followed the big man across the river.
Posted by C.D. Gallant-King at 10:06 AM
Email ThisBlogThis!Share to TwitterShare to FacebookShare to Pinterest
Labels: Flash Fiction, Jason Salvatori, Made to Suffer, Philip Overby, Roleplaying Games, The Walking Dead, Zombies