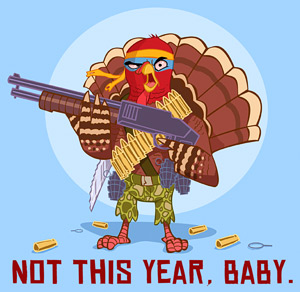 This is going to sound like a bad 90s stand-up routine, but what's up with Canadian Thanksgiving anyway? In the US, Thanksgiving is a huge event, celebrated by massive football games (which are seemingly equivalent in pomp and circumstance to the overthrow of oppressive regimes in other countries) and murdering fellow citizens in cattle-like stampedes over cheap electronics. In Canada we have some turkey, maybe a pumpkin pie. In election years, we'll passive-aggressively talk about politics. But it's really not a big deal. In Quebec they take the day off and go to the spa. In several other provinces it's not even recognized as a statutory holiday.

A quick bit of research (thanks, Wikipedia!) uncovers that Canadian Thanksgiving is actually older than its American cousin. The first recorded instance of "giving thanks" on Canadian shores took place all the way back in 1578 (compared to the Pilgrims OG version in 1621) when English explorer Sir Martin Frobisher attempted to set up a colony on Baffin Island in what is now known as the Canadian territory of Nunavut whilst searching for the ever-elusive Northern Passage to the Pacific.

Now, those of you who know a little of Canadian geography know that Nunavut is among the most inhospitable places on Earth, so setting up a colony there was about as successful as trying to attack Russia in winter.
Just trying to make landfall, Frobisher lost several ships along with their crews and provisions, but eventually the fleet made it and started kissing the frozen dirt. Mayster Wolfall (no he's not a Game of Thrones character, he was the fleet's preacher) then "...made unto them a godly sermon, exhorting them especially to be thankefull to God for their strange and miraculous deliverance in those so dangerous places ..." which in my opinion was not really a Thanksgiving Feast so much as a JESUS-CHRIST-THANK-GOD-WE'RE-ALIVE- FROBISHER-YOU'RE-AN-IDIOT cocktail party. But whatever the details (or how many slaps Frobisher received upside the head), this pants-wetting-landing in frozen tundra is what went down in the history books as the first Thanksgiving.

In case you're wondering what happened to Frobisher, over two voyages to the New World he lost several more ships but ended up bringing back to England a combined total of over 1500 tons of what he thought was gold ore. It turned out to be nothing but worthless pyrite. Fed up with exploration (and probably - rightfully - mocked by his peers) Frobisher took up a life of privateering in the name of England. Turns out he was way better at murdering Spaniards, as he ended up being knighted for his efforts.

Thanksgiving was celebrated irregularly for the next few hundred years, usually when there was a particularly good harvest or some other special event to celebrate - it was the same in the US. Thanksgiving didn't become an "official" regularly scheduled holiday until the modern era. The biggest Thanksgiving influence the US passed onto Canada was after the American Revolution, when those still loyal to Britain realized sticking around all those gun-loving Yanks was probably a bad idea and fled North. They brought with them their traditions of turkey, cranberry sauce, stuffing and taking advantage of the indigenous population. Just kidding! Americans had actually learned that from the Canadians and the British first.

After World War II, Thanksgiving got lumped in with Armistice Day (November 11, now Remembrance Day in Canada) and remained there for a few decades until someone decided that we needed a holiday in both November AND October. It was John Diefenbaker, the only Conservative Canadian Prime Minister to serve between 1930 and 1980, who made that call.

In 1957 Thanksgiving officially became the second Monday in October, and it's remained that way ever since.

So as you enjoy your turkey this afternoon, argue about politics and pray for a Blue Jays victory tonight, please remember Frobisher and Diefenbaker in your revelries, because without them Thanksgiving might be a completely different holiday. Maybe it would be in November like the in the States and be a even bigger deal. Just saying.

Did you know I've written a couple of books? They have nothing to do with Thanksgiving, but they are set in Canada... mostly. The first, Ten Thousand Days is now available at Amazon and many other booksellers worldwide. The second, Hell Comes to Hogtown, has greatly upped Canadian content in hopes of getting some kind of Government grant.
Posted by C.D. Gallant-King at 2:58 PM
Email ThisBlogThis!Share to TwitterShare to FacebookShare to Pinterest
Labels: #MondayBlogs, Canada, Diefenbaker, Far North, Frobisher, History, Thanksgiving