Why does everything take so long? (#IWSG September 2017) 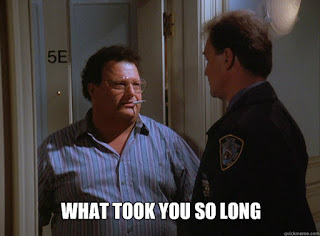 August was hard. Not specifically writing-wise (thought that was hard, too), but it was generally just one of those months when the universe decides to make life as complicated and challenging as possible.

The whole year has been like that, really. Maybe I'll tell you about it some time, but today's not the day. At least we're not underwater.

I wrote a bit through August, though as usual not nearly as much as I would like. I did actually (more-or-less) finish a draft of a manuscript I've been working on for years. I didn't jump for joy when I did because I've literally been working on this particular draft for 2 years and I know there's a lot more work to come, but in retrospect it's an accomplishment. I also started a short story that I've been thinking about for awhile that's a lot of fun.

So there are some victories, however small, but every word is a challenge. We'll get there, eventually. 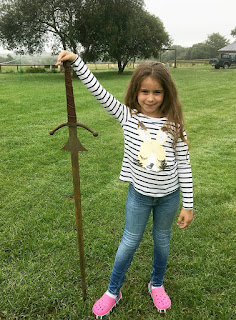 We can't all be little girls fulfilling ancient prophecies by pulling swords from ponds.


September Question
Have you ever surprised yourself with your writing? For example, by trying a new genre you didn't think you'd be comfortable in?

Sure, I've been surprised by parts of a story when I didn't expect it to go in that direction. Or sometimes when I can't figure out how to make a scene work and then an idea suddenly reveals itself unexpectedly.

I think that the biggest surprise is that everything about writing takes so much longer than I think it should. I don't know if it's unreasonable expectations on my part or what, but I keep making plans and deadlines and I never come close to meeting them. You think by now I would have figured this out.

For instance, after I put out Ten Thousand Days in the spring of 2015, I had the manuscript of Hell Comes to Hogtown well underway and I figured I could get it out by that fall. It didn't come out until summer of 2016. When I finished the first draft of Hell Comes to Hogtown in summer 2015 I started working on a major revision to an old book that I thought I could put out in 2016. I just finished that revision, two years later (to be fair I basically completely rewrote the whole novel). The "novelette" Revenge of the Lycanterrancephalopod was supposed to come out for Halloween 2016, but it just came out this spring. And yet, every time I set myself up a deadline, I blow through it without a backward glance.

At the same time, if I just made the deadlines later and more realistic, it would probably just be that much longer before I get anything done.

So I will continue to trudge along and whine about it. Occasionally I will put out small flashes of literary genius, but in the meantime you all get to listen to me complain.

Yeah, that's how I usually feel after listening to me, too.

For those still sticking around, thanks for listening.