I'm a few days late with this - my holidays were a whirlwind of doing nothing so I'm still recovering and putting things back together. At this point most people are looking forward to the new year (or slogging through their first day back to work) but I didn't want to miss the opportunity to look back at last year, even if it's a few days late.

In all seriousness, 2015 was a huge year for me so I wanted to take a moment and be thankful for all the great things that came along since I last did an update like this. I called 2014 a "pretty good year," but in all honesty this one has been many times better. Let's discuss, shall we?

1. First off, on March 13th (Friday the 13th no less!) we welcomed my daughter Evangeline into the world. She is beautiful and healthy and doing wonderful and the best little girl in the whole world. All you other parents out there with daughters will just have deal with it. She also makes these terrible growling sounds like a cross between Gollum and a Gremlin while smiling the whole time, and I'm afraid one of these days I'm going to wake up in the morning with her chewing on my face.

2. In addition the best little goblin girl, we have an amazing son named Benjamin who is just about to turn 4. It is utterly mindboggling to watch his continued growth from a baby to a boy, and I'm so proud of him. He's so smart and sensitive and perceptive and full of life. He's also massively stubborn and hard-headed, but knowing who is parents are it's hard to fault him for that.

Also, my wife refused to name our son Luke when he was born because she didn't want her kid named after a Star Wars character. Now, almost four-years later, he has retroactively become named after Han Solo's son. Score!

3. I self-published my first novel, Ten Thousand Days, on May 6, my birthday. For some people publishing their first book is the final step in a long struggle of many years. They work and tinker and query and write and rewrite and so on and so on. While I have done all of that, it wasn't with Ten Thousand Days. Ten Thousand Days was my test-run to see how publishing (particularly self-publishing) was going to go. It was the first step in what I plan to be a long journey. The things I've learned in this process is going to go into my next, better book, and the even better book after that one. I'm optimistic that 2016 is going to be a very big year for me, writing-wise, as I continue to develop and find my voice and pace.

4. I had the steadiest blogging year ever since I started writing online. My overall hit count is no where near as high as last year (because I haven't written much at Rule of the Dice, which always generates good traffic), but I have more than doubled the hits on my personal web page, which is probably better in the long run. Better people come find me and get to know me at my own site than read funny Dungeons & Dragons stories from the faceless guy, right?

5. Also on the topic of writing, I released a short story on Halloween, Tentacles Under a Full-Moon. It was written as a joke but I liked the way it turned out so I made it available first for free and then as a $1 download at Amazon and other places. I've gotten quite a few downloads on that one and I think some people have even read it! 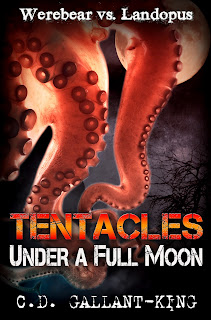 I also have a couple of other books and projects in progress that will likely see the light of day in 2016, first and foremost my spectacularly-failed crowdfunded novel. You'll hear more about that one very soon.

6. Improved on my running in all aspects - better times, longer distances, more work-outs - despite having a new baby, no energy and a messed-up schedule. In spite of the increased activity though, somehow I've actually gained 10 pounds from this point last year. Getting older sucks.

7. I did my first narration as I recorded an "audio book" version of Will Bly's touching (and crude) holiday tale "F*ck You Santa: A Christmas Story." It's available for free here from the fine folks at the Grim Tidings Podcast.

8. Speaking of which, I've greatly expanded my circle of friends and acquaintances online, talking to and getting to know lots of people in the writing, podcasting and gaming world. I've never been much of a social person so it's weird to have people I talk to even semi-regularly, especially since I've never met any of them face-to-face. I know most people first went through this experience like 15 years ago, but I'm just catching up now.

9. I saw Star Wars: The Force Awakens. I've been waiting 30 years for that movie. That's all I have to say about it right now.

So that was my year in a nutshell. How was yours? What are you looking forward to in 2016?
Posted by C.D. Gallant-King at 3:48 PM
Email ThisBlogThis!Share to TwitterShare to FacebookShare to Pinterest
Labels: Grim Tidings, Lists, Rule of the Dice, Star Wars, Ten Thousand Days, Tentacles Under a Full Moon, Will Bly, Writing, Year End Review