The First Money I Ever Made As a Writer 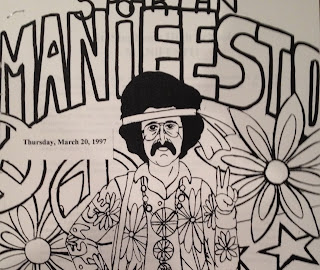 I threw this factoid out in a random comment reply, but I realized it was a good enough story that I should probably share the whole thing.

I mentioned last week that I had received my first royalty payments from Amazon, but what I neglected to mention was that those few bucks were not actually the first money I ever made from writing. It was the first money I had made in about 20 years, though, and the first that wasn't - for lack of a better word - shady.

You see, in high school I wrote for a "literary magazine" called the Manifesto. It was a student run project, completely written and produced by our 11th Grade class. I did all the layouts and typesetting not just because I was the fastest typist but because I didn't trust anyone else to do it properly (I was a self-publishing control freak even back then). I was also the defacto treasurer: Since I was in charge of getting the covers printed so I held onto our meager funds to pay for printer ink and photocopies. I think we charged like 50 cents an issue and didn't sell many copies, so it's not like we were talking William Randolph Hearst publishing money here.


Anyway, at the end of the school year there was like $5.25 in coins left in our printing "account" (which was actually a sandwich baggie under my bed). I held onto it through the Summer thinking we would need it in the Fall, but for whatever reason the magazine never got off the ground again. Maybe because I got a girlfriend and had other things on my mind. But I still had that bag of coins, and I held onto it all through the school year. When I was leaving home to go away to University, I found the bag and wracked my brain for all of about ten seconds on what to do with it:

"I did more work on the magazine than anyone else. Screw it, I'm keeping it."

I think I bought a Coke and some chips or something with it. That was the illustrious start to my "professional" writing career: blatant thievery. I regretted it afterward - while I did do a lot of work on the magazine (contributing many stories in addition to the layout, editing, etc), I probably should have shared the money with the other guys. So if any of you are reading this - Morgan, Greg, André, Steve, Chris, probably some others I don't remember - I apologize, and I owe you each like 65 cents. If you give me your addresses I'll send you an email money transfer.

As an amendment to the above story, during my final year of High School (remember, the year after we did the magazine), a bunch of guys got together during the yearbook photo sessions for a picture of the Manifesto team. For some reason I got super pissed at this because it wasn't part of our senior year and I thought it was dishonest to say it was (also remember, this was before I stole the treasury money). It didn't help that they had a guy pose in the picture that had nothing to do with the magazine just because he was trying to get in as many yearbook photos as possible. I think he's even in the picture of the girl's basketball team. My point is, you totally can tell I'm pissed in the photo, I have the grumpiest, nastiest look on my face. They even put my name down as "Editor-in-Chief" to try and appease me but it didn't help any.

I was a surly dick as a teenager and photographic evidence of that fact has been preserved for posterity.
As an amendment to the above amendment, going back over these old issues for the pictures reminded me of the dumb and hilarious shit that we did as kids in high school. The magazine was basically in response to the terrible "official" high school newspaper, and we spent a lot of our time and energy making subtle (and not so subtle) digs at "The Man." I've got some great and embarrassing stories I'm going to have to share in some future post - maybe even a whole series.


How about you? How low have you sunk in the name of art or making a buck? I prefer stories that include both.
Posted by C.D. Gallant-King at 5:30 AM
Email ThisBlogThis!Share to TwitterShare to FacebookShare to Pinterest
Labels: Amazon, Manifesto, Self-Publishing, Writing, Young People