Why All the Hate for the Lady Ghostbusters? 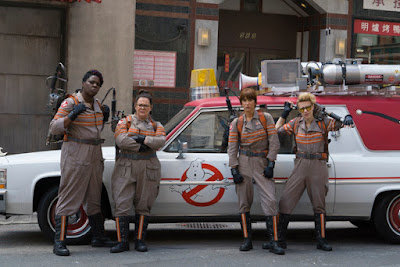 So many old franchises are being rebooted or given unnecessary sequels. Why is this one drawing some much ire?

I think I know, but I really don't want to say it.

In the comment section of every article I've read about the film, you will find no end to the derisive comments. "Melissa McCarthy isn't funny." "Ghostbusters is a perfect film, it shouldn't be messed with." "Paul Feig is a hack." Those are the most pervasive arguments, but there are plenty more, most unfortunately directed at the attractiveness, age and talent of the female cast. The blow-back from fans was so bad that Sony had to announce a second reboot featuring a male group led by Channing Tatum to try and appease them.

Seriously? Isn't this 2015? The US will elect a black president and legalize gay marriage, but heaven forbid we get a female cast of Ghostbusters.

(On a side note, I don't like Hillary Clinton's odds for next year).

Politics and silly arguments aside, I'm personally pretty excited for this Ghostbusters remake. I love Feig and McCarthy's movies, and I'm not the only one. Bridesmaids made $288 million worldwide. The Heat (One of my favourite comedies of the last several years) made $229 million. Spy made $220 millions and counting (all figures courtesy Box Office Mojo). Feig and McCarthy make successful movies together (and Kristen Wiig is pretty friggin' hilarious, too). Like it or not, Melissa McCarthy is a viable comic movie star. Hell, even Mike & Molly, McCarthy's star vehicle sit-com, gets consistent ratings and has garnered McCarthy numerous award nominations and even an Emmy win.

The argument against mining old content for new movies is fair enough, but completely pointless. That's all big studios make these days. The cool thing about the new Ghostbusters is that they're actually doing something different with an old idea. It is still an old idea, but at least they're shaking it up - and with talented people no less. Kudos to Sony for trying it. I hope it makes a billion dollars just to shut people up.

So how about you? Are you looking forward to the new Ghostbusters? Do you think it will be successful?

Posted by C.D. Gallant-King at 10:13 AM
Email ThisBlogThis!Share to TwitterShare to FacebookShare to Pinterest
Labels: Ghostbusters, Melissa McCarthy, Movies, Rant