Celine over at Down the Rabbit Hole tagged me for a fun challenge: to make a list of my ten favourite screen characters. I was thankful for an idea and an excuse for a blog post, so I jumped all over it.

At first I had trouble thinking of enough, but as I went the list snowballed until I had dozens (especially when I realized that I could include characters from the TV screen!) and had to cut myself off. So basically I just picked ten at random from near the top of the list and here they are in no particular order: 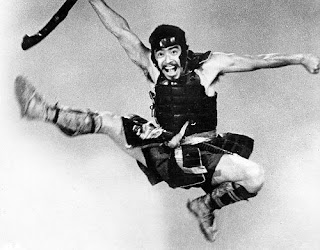 When I first saw Seven Samurai as a teenager, I hated the Kikuchiyo character. I wanted a serious, bad ass samurai movie with cold, expert killers. Mifune was an over the top buffoon. But as the story progressed, and he became such an integral part of the plot and such a sympathetic character, you can't help but root for him. And then when I saw Mifune in other movies (he's brilliant in Yojimbo), I came to appreciate the actor and the character even more. As far as I'm concerned now, Kikuchiyo was the main character in Seven Samurai, and he has one of my favourite lines in any movie. It sounds silly in context, but if you've seen the movie it's perfect.

Kikuchiyo: I can't kill a lot with one sword! 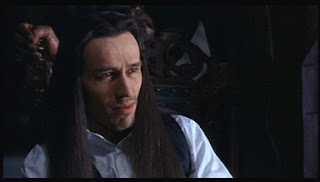 Really, I could pick any of the villains from The Crow (one of my favourite movies from my teenage years), but Top Dollar stood above them. With Wincott's voice and Top's slick evilness, he was the epitome of a cool bad guy for me. He even used a samurai sword! He was also the stereotype of every vampire in every story I wrote or role-playing game I played for years to come. He's probably still my favourite vampire character from any film, despite not actually being a vampire. He just has the right level of vileness while at the same time keeping a slight sense of humour. It's awesome.

Best quote (after shooting the crow): 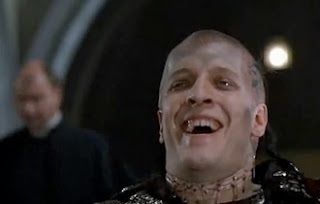 The Kurgan was the immortal villain in the first (and only good) Highlander movie. While Top Dollar was slick and cool, Kurgan was a brute: mean, nasty, a bully. He kills the main's character's mentor and rapes his wife. He's despicable, but Clancy Brown just chews the scenery so masterfully and his voice is so frigging awesome, he steals the scene every time he's on screen. Plus he's so physically imposing and made up to look like a such a whack-job, he really does look like a dangerous monster.

Kurgan has lots of great lines (it helps they're delivered in Brown's voice) so here's one at random:

Priest: This is a house of God. People are trying to pray. You're disturbing them.
Kurgan: He cares about these helpless mortals?
Priest: Of course He cares. He died for our sins.
Kurgan: That shall be his undoing. 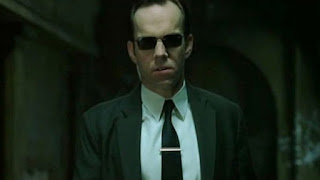 Hey look, another bad guy! They're not all villains, I swear.

Agent Smith is the quintessential, creepy emotionless bad guy. The fact that he actually ends up becoming obsessive and crazy, despite the fact that he is supposed to be a logical machine, only makes him all the more terrifying and awesome. Right from the beginning you want to punch this guy in the face, yet he's so obviously dangerous and deranged that you don't dare go near him ("If you meet an Agent, run" remember?) Perfect bad guy.

Agent Smith: I'd like to share a revelation that I've had during my time here. It came to me when I tried to classify your species and I realized that you're not actually mammals. Every mammal on this planet instinctively develops a natural equilibrium with the surrounding environment but you humans do not. You move to an area and you multiply and multiply until every natural resource is consumed and the only way you can survive is to spread to another area. There is another organism on this planet that follows the same pattern. Do you know what it is? A virus. Human beings are a disease, a cancer of this planet. You're a plague and we are the cure. 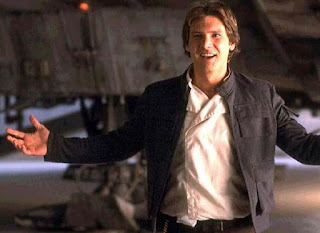 When I was a kid I was a Luke fan. The wide-eyed, simple kid who grows up to be a hero, that's the character we're supposed to identify with, right? But when we get older we all realize that Han was the cool hero. The nonchalant badass.

Except I realized recently why I probably wasn't a huge Solo fan as I kid. The argument for years has been "Han shot first" right? That the Special Edition, where they add Greedo shooting is some kind of terrible affront to storytelling? Well someone pointed out to me, after watching the original "unspecialized" edition with their 8 year old, that watching the supposed "hero" murder a random dude in cold blood with barely a provocation is HORRIFYING. When you're a teenager and older, you're like, "Yeah, that's bad-ass!" but when you're a kid who thinks good guys are supposed to be, well, good, you're like "Daddy, why did he shoot that man? He was just talking to him!"

Han Solo: Sorry about the mess. 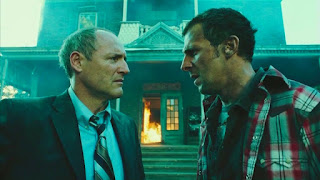 Yeah, these are two character, but they're such perfect sides of the same coin and play off each other so well you can't talk about one without the other.

Bon Cop/Bad Cop is a Canadian movie about a mismatched pair of detectives trying to solve the murder of a body that's found literally on the Ontario (English) and Quebec (French) border (The body actually gets ripped in half while they're fighting over it, to tell you what kind of movie it is). Ward is the no-nonsense, by the book straight man while Bouchard is the wild, dirty loose cannon, and they're brilliant together. The movie is hilarious and I recommend everyone check it out. You may not get all the Canadian humour (there's a lot of hockey references) but I think you'll still appreciate it.

[while discussing the aforementioned murder victim]:

Martin Ward: His heart is in Québec.

David Bouchard: But his ass belongs to you. 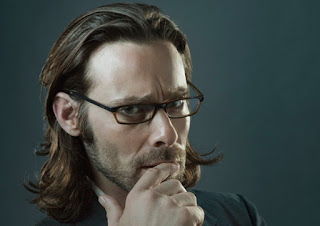 Gaius almost singlehandedly wiped out the entire human race by thinking with his dick. Seriously - the whole premise of the series is that BILLIONS of people died because he couldn't keep it in his pants. He is a sniveling, self-serving coward, who - despite being a genius and charismatic leader - spends the entire run of the series trying to find ways to save his own neck instead of doing anything to help others.

Yet, despite being this terrible, terrible person, he survives through years of hardship that destroys and kills far braver and stronger people. In fact, he even strives at points. There are even points where you feel sorry for him (or at least I did, maybe I'm a bad person). Callis plays it to the hilt, making Baltar skeevy and haunted but also charming and kinda hilarious.

Doctor Gaius Baltar: So the fate... of the entire human race depends upon my wild guess. 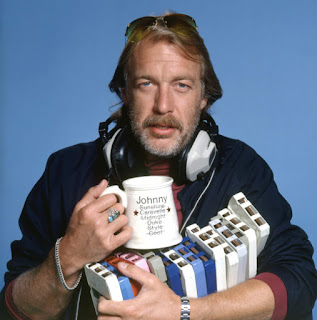 I was a bit young for WKRP, but my parents watched it so my little brain was molded and warped by watching along with the misadventures of Johnny, Mr Carlson, Andy, Venus, Jennifer, Les and Herb during syndicated re-runs when I was about 5. I didn't get most of the jokes, but I laughed when my parents laughed and learned to love it.

Watching it again years later I really appreciated how well made and hilarious it was. It's probably my favourite sitcom ever, and Johnny Fever is probably my favourite character. Hesseman was genius here as the washed up, stoner disc jockey. Every line was gold, flipping back and forth between hapless self-pity and biting snideness (especially toward Les).

I hope they put out a proper DVD version of this show with the music intact some day.

Dr. Johnny Fever: Do you have enough money to feed yourself?

Dr. Johnny Fever: I don't, can you loan me some money?

Dr. Johnny Fever: Can you loan me some food? 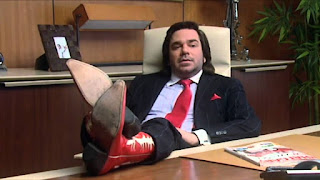 All of the characters on IT Crowd are brilliant, but the company owner Douglas stands out (the goth Richmond is a close second) for his complete perversion and disconnection from reality. He lives in his own little world and every twisted nonsequitor that comes out of his warped mind is hilarious. One of these days I should just write a post about my favourite Douglas Reynholm lines. 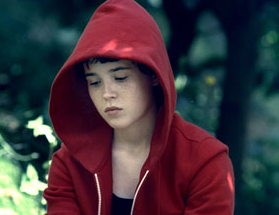 If you haven't seen this brilliant film about revenge and child molesters, do yourself a favour and check it out. Just be warned that you will probably be disturbed for days afterward. It is intense and really messes you up.

Ellen Page is always wonderful, but in this one she plays a young girl who is picked up by a pervert only to turn the tables on him and begin a series of terrifying and thrilling scenes. She is probably the most sympathetic pyschopath you will ever meet because she is totally justified in her behaviour. Seriously, check this movie out. Just be ready to watch some IT Crowd and WKRP to clear your palette afterward.

Jeff Kohlver: Ah, so you and your mom are both wacked?

Hayley Stark: I dunno. There's that whole nature versus nurture question, isn't it? Was I born a cute, vindictive, little bitch or... did society make me that way? I go back and forth on that...

So what about you? What are your favourite film or TV characters? I'm going to tag and challenge Philip Overby, Loni Townsend, Birgit Bedesky, Stephanie Farris, and Jennifer Hawes to come up with their own lists!
Posted by C.D. Gallant-King at 8:50 AM
Email ThisBlogThis!Share to TwitterShare to FacebookShare to Pinterest
Labels: Battlestar Galactica, Highlander, IT Crowd, Lists, Movies, Star Wars, The Crow, The Matrix, TV, WKRP