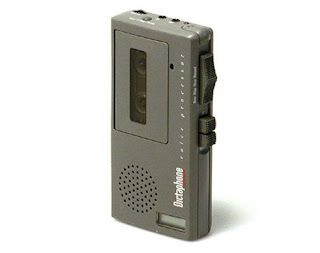 I don't usually write flash fiction, but I'm always eager to look for an excuse for a post, and I figured I could spare 15 minutes for this one. Melanie Atherton Allen tagged me with this interesting challenge that's been sitting in my inbox for a week. Somehow I managed to make it all this time without reading the prompt (actually it was easy, I forgot about it) but here it is in all it's rapidly-typed glory.

(The rules are below, in case you're interested in what this was all about).

Dictaphone in a Swamp

"And a hammer. Can't forget the hammer."

It was innocent enough. It could be a shopping list. Maybe the guy was going to the hardware store to get supplies for a home improvement project.

There was a few moments of dead air, I let the tape play through this time. I rubbed some more dirt off the Dictaphone as I waited for the next part. The first time I had listened to it, I had missed the second part.

I was praying I had misheard it.

It was an old model recorder, and probably been sitting in the mud and the grime a long time. Years, maybe. There was a tape inside but I didn't have high hopes for it when I popped in fresh batteries.

I listened to it once, heard the list, and that was it. I fast-forwarded a way but didn't hear anything else. The kids started yelling about something so I tossed it in my desk drawer and forgot about it.

That was a year ago. I found it again this morning, and listened to the rest of the tape.

About ten minutes in, there was a click as a fresh recording started.

"I'm gonna grab her after work. She walks home alone along 5th street. I watched her every night last week."

The voice had a slight Southern accent, but I couldn't place it. It was a man, not too young, not too old; he could have been anywhere from 25 to 50, as far as I could tell.

"September 13, 2013. You'll remember that date, won't you? That's the anniversary of the day you left me. That's the date I'm gonna make sure you never forget.

"That leaves us almost two weeks to play, don't it?

That was it. The recording clicked. More dead air.

Why did he record it? Was this his confession? Did he intend for "her" to hear it?

I had found the recorder on September 9.

It hadn't been in the swamp that long after all.

I put my head in my hands.

What do I do now?

I wrote 374 words in 13 minutes. I had 2 minutes to spare but I saw the end coming and left it at that. I think it clued up nicely. I admit I used the extra time to go back in and add the italics.

I'm going to tag a few more people, in case they're interested in participating. I have no idea if these folks do challenges or flash fiction and I couldn't even get to five, but I've I don't want to tag the same people I tagged last week, so...


Here are the rules: