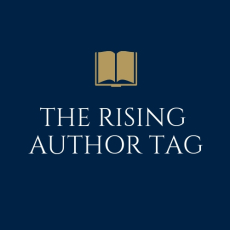 A couple of weeks ago I was tagged by the lovely and talented C.G. Coppola to participate in the Rising Author Tag. Personally I think I kinda plateaued years ago, but if someone else thinks I'm "rising" who am I to judge? ;-) Of course I didn't notice the tag at the time, but I eventually picked up on it (Thanks, Loni!) so here we go! The rules are simple:
So without further ado:

What are you currently working on?
A bunch of stuff, honestly. I'm in the middle of a short story that I was writing for someone for Christmas, I hope I still have time to get that finished. I've also got ideas for Werebear vs. Landopus Part 4 that I'm itching to put into words. But the next "big" project I'm slowly making progress on may or may not be a sequel to what may or may not be Hell Comes to Hogtown. Allegedly. I can neither confirm nor deny anything.

Are you a plotter or a panster?
I hate to admit it but I'm a pantser. I want to be a plotter because I always imagine having a firm outline will make the writing easier (and avoid the dozens of re-write I usually have to do), but I find whenever I plot too much I lose interest in actually finishing the story. It's like once I know everything that will happen, I'm no longer interested in writing it.

If you could re-write any of your books, would you? And which one(s)?
I actually completely rewrote Ten Thousand Days last year, so that one's good. Honestly if I could re-write anything it would be one of the seven or eight unpublished books I have in The Closet. None of them are publishable in their current state, but some of them have good ideas in there I would love to use. It's just a matter of finding the time and energy to re-write them when there's so much NEW stuff I want to work on.

How long does it typically take you to write a book/story?
It varies tremendously. The original first draft of Ten Thousand Days took about 72 hours. Hell Comes to Hogtown took 18 months from writing the first lines to release day. I have another manuscript I'm submitting now that I originally wrote in less than 20 days, but the re-writing and revising took about 3 years. It shouldn't come as a surprise that those shorter timelines all happened before I was married and had kids. These days I have way less free time so even a 5000 word short story often takes up to a month to write.

Of all your characters, who do you wish could be real?
That's a tough one. A lot of my characters are horrible, annoying and/or gross, so I'm not sure I really want any of them to be real. Sister Siouxsie Cue from The Gun Nun would be fun, but she probably wouldn't want to hang out with me. Same with Dee from Hell Comes to Hogtown. My characters are way more interesting than me, and would likely steer well clear of me at a dinner party.

How many drafts do you go through?
A lot. Too many. Once I finish the first draft, then I usually write the outline to see if what I wrote fits a sensical narrative structure. It inevitably doesn't, so then I have to start adding and removing scenes, and moving stuff around so that it makes sense. Then there are multiple passes to fix grammar, clarity, voice, etc. Often I have to do this multiple times from different characters' point of view. Then it goes to the editor and they have a round or two of revision, too. How many drafts is that? I don't count them, I just see it more as an organic, growing process. Sometimes I work on small sections, sometimes I work on the whole piece, but the work overall is constantly evolving and changing.

When do you tend to write? Early or late?
Both. It's either early in the morning before the rest of the house gets up, or late at night after everyone's gone to sleep. Sometimes I write on my lunch break, and I used to write during my bus commute to and from work. So basically I write anytime I can find the free moments to do so.

Do you listen to music while you write?
Almost always. Sometimes it's to set a particular mood and get me in the right frame of mind, but usually it's just to drown out the world around me. Kind of like a sonic barrier. When I wrote on the bus I would crank my music up all the way to block out all the noise and sound around me, in my headphones of course. Writing is probably ruining my hearing.

What is your least favorite thing about writing?
I think I mentioned it before, but it's definitely the revising part. That's why I have so many manuscripts that's just a first draft - I find going back to re-write and revise a monumental task. Honestly I would rather market and write query letters than revise. I like to say Writing is fun, but revising is work, and I truly believe it.

What is your most favorite thing about writing?
As a corollary to the previous question, my favourite part is writing the first draft. When the story is new and fresh and flowing freely, everything is very fun and exciting. I guess it's like a new relationship. Every day is a new adventure with new things to discover. I guess that means revising is like an older, established relationship, where everything is a slog and you have to work to stay together? I'm going to stop this analogy before I get in trouble.

I have no idea why this tree has giant, throbbing testicles.

And now as a Christmas present to you all... I'm NOT going to tag anyone else! Actually I'm just tired and it's late and I can't think clearly enough to come up with 10 more questions. :-) Here I am ruining the game, I'm terribly unfun, I know. But if anyone reads this and WANTS to answer those ten questions (or ten similar questions), GO for it. I was trying to come up with questions about secret author goals and personal measures of success but I kept dozing off. Maybe I'll try again in the New Year.

I hope you all have a fun and safe holiday season. May you relax and not feel bad about missing your word counts, and hopefully all get a good book or two under the tree (or other appropriate cultural festive decoration).

Sure this is cute now, but wait until you come home and there house is covered with broken glass and the cat has tinsel hanging out of its butt.
Posted by C.D. Gallant-King at 9:34 AM
Email ThisBlogThis!Share to TwitterShare to FacebookShare to Pinterest
Labels: Blog Hop, CG Coppola, Christmas, Rising Author Tag, Writing