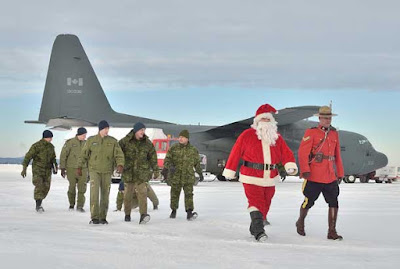 Officially, according to international law, no nation owns territorial rights over the North Pole. So shouldn't that mean that Santa Claus is a resident of no country? A citizen of the whole world, as it were?

Sort of. Five nations have borders that overlap the Arctic Circle, and thus occasionally, unofficially, try to stake claim to the North Pole (especially the potentially resource-rich seabed beneath). All five of them also claim to have direct lines to Santa, but one of them is obviously trying way harder than the others.

In Denmark and Norway, kids send their letters for Santa to Copenhagen and Oslo, respectively, where helpful postal workers "pass on" the mail to the Big Man up North, and he sometimes sends personalized replies. In Russia, the government encourages kids to use standardized templates for their letters and not to include personalized information like their age, address and school to avoid their identities being stolen (because Russia).

In the United States, kids only get replies from Santa if they send their letters along with a self-addressed, stamped envelope... and also include's Santa's reply, hand-written by their parents. I swear, that's seriously how they do it. At least they mail them to the post office in Anchorage, Alaska, which I guess is sorta close to the North Pole. 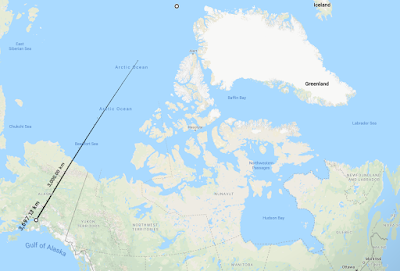 But in Canada, we do it right. Kids in Canada (and technically from around the world) can write letters to Santa Claus at:


That's it. No weird PO boxes or redirects to post-offices in the capital city. Santa Claus has his very own, custom postal code ("Ho, Ho, Ho," get it?) You don't even need to add a stamp; it will get delivered if you just put a glow-in-the dark Minions sticker on the corner instead. And the best part? He always sends back a personalized letter in return.

Since 1981, Canada Post has run a program where hundreds of volunteers open, read and respond to children's letters to Santa received from around the country and the world. In 2017 alone, over 1.6 million letters were answered, requiring over 200,000 volunteer hours to accomplish. Even the Amazon warehouse can't process orders that efficiently, and they pay their employees! (well, sort of)

Even this year, when a postal workers labour strike delayed some mail delivery, the program continued and the post office urged kids to keep writing their letters (they just had to make the deadline to get them in a little earlier). I know some people grumble at postal workers, but I can't find fault with anyone who devotes so much time and energy to making little kids happy. 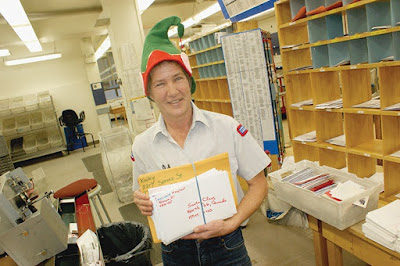 I think the strike had something to do with them forcing everyone to wear these dumb hats.

Sure, lots of places lay claim to being the home of Santa Claus. The real Saint Nicholas lived and died in 4th-century Turkey. The cities of Bari and Venice in Italy both claim to house the bones of St. Nick, stolen from their resting place during the Crusades. Somehow this makes them a tourist attraction, though I don't know how you explain the grave-robbing part to kids. A tiny village in Alaska, which changed it's name to "North Pole," has a pretty good gig going, though I doubt the real Santa has a 50-foot tall statue of himself in his front yard. 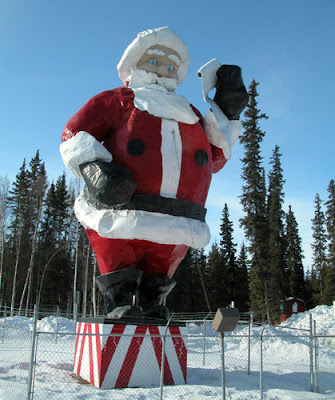 The province of Lapland in Finland has long been rumoured to be the home of Father Christmas (though other Scandinavians vehemently disagree). When Eleanor Roosevelt visited the city of   Rovaniemi, Lapland during a 1950 post-war reconstruction tour, she insisted on meeting Santa Claus, so the locals quickly built a cabin and told her it belonged to him. The First-Lady was apparently satisfied, and I can't figure out if the Finns were making fun of her or not. They did, however, turn that hastily-built cabin into a massive theme park that now sees 500,000 visitors a year, which is further proof that Europeans are good at suckering Americans.

But for all the claims, I think the best one is clearly with Canada. We have a legitimate postal code for Kris Kringle, and he always finds a way to write you back. The North Pole obviously has a red and white maple leaf flag flying over it. 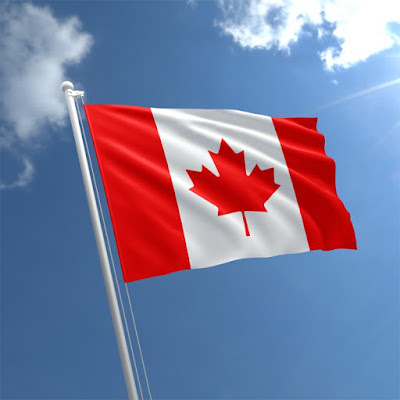 Just don't tell the United Nations about it.