This week in my on-going series of author interviews I spend a few minutes with Amir Lane, author of the Morrighan House Witches series. Lane is all over the place right now, having released two books already this year, and they also have a story in the upcoming Dawn of Hope Anthology from Dragon Realm Press, which will be released next month. Without further ado, here's my interview with Amir! 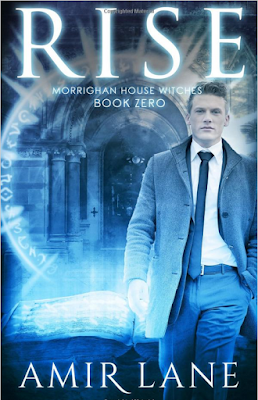 When did you decide to become a writer?

Seventh grade. I actually remember the exact moment, too.

This was back when Quizilla was a thing. I used to do all those personality quizzes where they tell you which character or colour or random picture they found online you are. Man, I loved those. I used to do them every chance I got. And then, because that's what I was into back then, I discovered Naruto fanfiction. Before this, writers were, I don't know, on some kind of pedestal. Normal People couldn't be writers.

I said nothing. I wrote Star Wars and pro-wrestling fan fiction.

All of a sudden, here was someone who was maybe only a few years older than I was who had written this amazing series. It was a total paradigm shift. All of a sudden, writing was something that I could reasonably do if I wanted. So I started writing fanfic myself. And of course it was awful, but it was exactly what I needed to get started.

We all need to start somewhere. How about now? Do you write full-time or part-time?

It's not stressful? I envy you. How often do you write, and do you have a special time during the day to write?

I try to write every day when I get home. I like to get at least a scene out a day but life happens. So I find that if I do it as early as possible, it's more likely to get done.  I always keep at least notebook on me, because half my stuff is on paper and the rest is digital, so I can always write a few lines whenever I can grab a few minutes.

Do you aim for a set amount of words/pages per day?

Yeah, what I do is I give myself a word count for my draft and a time period, and I stick it in a calendar that automatically tells me how many words per day I need. The cool thing about it is that I can set it so that, you know, I don't always have as much time on weekends so make my word count higher during the week. I try to meet whatever that assigns me and if I can't, it gets redistributed. I usually do about eight hundred a day. If I'm editing, though, I try for two chapters a day. I'm usually pretty good for meeting it.

You mention fan-fiction, which often has a collaborative aspect. Have you written works in collaboration with other writers?

I tried it a few times when I was just starting out. I wanted to write dual-POV books and I thought it would work best with one person writing one, one person writing another. It also took some of the pressure of writing every single chapter myself, and gave me someone to bounce ideas off of. The problem I consistently found, though, was that one person almost always lost interest before the other so they all fell through. I still love collaborating and I do back-and-forths as writing exercises. There is one thing that I've been planning to write with my partner but with everything on our plates right now, it might be a while before we actually get to it. 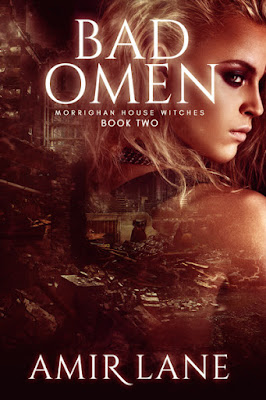 How much research do you do, and what kind of research?
It really depends on the book. I didn't do a huge amount for Shadow Maker, mostly because I didn't have to. The thing that needed the most research was the mental illness aspect that plays kind of behind the scenes with two of my main characters. I did do a lot of reading on that, but I was also able to pull a lot from my own experiences with some of the issues that come up.

The other books that I'm working on, though, are definitely going to involve a lot more research. The third book of my Morrigan House Witches series, Panthera Onca, is going to be partially set in Brazil. So that's going to be a lot of hitting the library with a notebook and reading until my eyes bleed. Which, you know, I'm actually looking forward to. And The Duality Series is a historical so I'm spending a lot of time getting a feel for what was going on, what my characters would have had access to, the kind of weapons they would use. Even things like, horses. I've got a ton of PDFs on my tablet that I'm marking up and taking notes in.

I'm really big on magic realism so it's really important to me to have as much accuracy and as much realism as possible, up until the point where you just have to go, 'Screw it, it's magic.' I come from an engineering background and an engineering family, so I still have this mindset of, you can have an entire dimension of a wall be negligible but only if it makes sense. And this comes up a lot in Aeqrab. I bring in a lot mythological species, and making them work in a modern world takes a lot of thinking. I have this Mesopotamian demon, it's, Could something bipedal have horns like these? If they have no pupil, how would they be able to see? And it's a lot of questions you can't find on Wikipedia.

Answering all of these questions has actually been so much fun for me. My younger brother did a year in biomedical science and he's finishing off a physics degree, and he is without a doubt one of the most intelligent people I have ever met (don't tell him I said that). He is so good at understanding the world and how it works to the point that he's the biggest idiot I've ever met, but he's always the smartest person in the room. And this works out perfectly because I can hand him these questions or hand him a list of features I want my lilin to have and he'll come back with, 'Okay so in this species, but also, maybe you could try.' And I have enough of a science background that we can go back and forth about, 'Okay but what if instead' or 'Okay but this species.' Meanwhile my parents are looking at us like, 'What the hell are they talking about, what's a...?' It's great. I love it.

Amir Lane is a genderfluid supernatural and urban fantasy writer from Sudbury, Ontario. Engineer by trade, they spend most of their writing time in a small home office on the cargo pants of desks, or in front of the TV watching every cop procedural or cooking competition on Netflix. They live in a world where magic is an everyday occurrence, and they strive to bring that world to paper. Their short story, Scrap Metal and Circuitry, was published by Indestructible magazine in April 2016.

When not trying to figure out what kind of day job an incubus would have or what a Necromancer would go to school for, Amir enjoys visiting the nearest Dairy Queen, getting killed in video games, absorbing the contents of comic books, and freaking out over how fluffy the neighbour’s dog is. 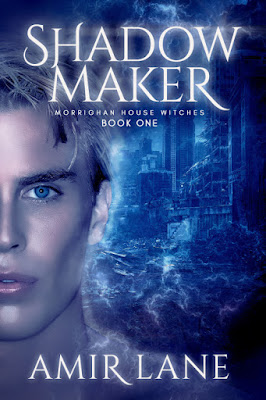 Physics major Dieter Lindemann is perfectly content living in a world where the Shadows he sees and hears are nothing but hallucinations. But when one attacks him, he’s forced to confront the fact that the Shadows are not only real, but dangerous.

Though Necromancer Alistair Cudmore offers to help him, Dieter quickly realizes that what he and Alistair want are two very different things, and it’s difference that could cost him his life. Controlling and possessive, Alistair pushes him further and further into blood magic. An incident at a club forces him into Necromancy, and he’s dragged down into a world he never wanted any part in. As the spirits and Alistair grow more and more violent, Dieter must break away from his mentor and learn to control the Shadows on his own before they destroy him. Only, Alistair isn’t about to let him go without a fight. 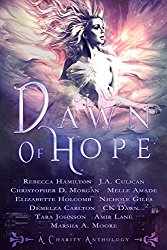