The Toronto Circus Riot of 1855 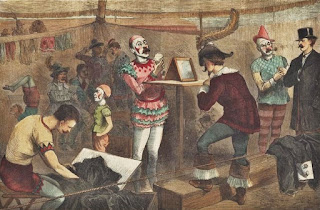 Some of you know that I love weird Canadian History (see: The soldier who adopted a bear and brought it overseas to World War I), and the following is one of the weirder stories out there. How this hasn't be dramatized as a film, I have no idea. I'm thinking I'm going to have to write a novel about it myself.

Picture this: Toronto, mid-nineteenth century. Victorian prudishness has not yet settled into the only recently-incorporated city, which was mostly still a booming frontier town. Canada would not officially exist as an independent country for another twelve years. The city had a huge Irish Catholic population that clashed regularly with the Irish Protestants (as well as the English and the Scottish), having brought the ancestral grudges with them when they came to the colonies to escape the Great Irish Famine.

On the evening of July 12, 1855, the Hook and Ladder Firefighting Company visited Mary Ann Armstrong's brothel on King Street, as was the accepted after-hours activity for a volunteer fire department at the time. Now, it must be pointed out that two weeks prior, this same company had gotten into a brawl with a rival firehouse when both groups showed up to combat the same blaze.

Yes, they had a "rival" firehouse. Yes, they fought over who got to put out a fire.

Trust me, it gets even better.

It turns out the circus was in town, and actual honest-to-gods clowns from SB Howes' Star Troupe Menagerie and Circus showed up to partake in Ms. Armstrong's "services." It doesn't mention in the history books whether they were still wearing their costumes and make-up, but I would like to assume that they were. The story goes that a drunk fireman named Fraser picked a fight with one of the clowns (because of course he did) and a brawl broke out. The clowns then proceeded to beat the ever-loving daylights out of the burly firemen, putting two of them in the hospital.

Seriously, how would you react if these guys showed up at your whorehouse in the middle of the night?

The firefighters were all Irish Catholic Orangemen, and an army of their countrymen showed up at the circus fairgrounds the next day (poetically, Friday the 13th) to cause trouble and get retribution. Police were called, but since they were mostly members of the Orange Order themselves, they just stood by and smoked cigars while the crowd grew more and more violent, demanding that the carnies "send out the clowns."


See? Actual newspaper clipping of the event. I'm not making this up.

The situation got nastier as the locals set fire to the circus tents and wagons. The Hook and Ladder Company was called, but instead of putting out the fire (someone should have called that rival firehouse), the firemen started tearing down the last of the tents where the carnies were hiding. The mayor and police chief Samuel Sherwood showed up at the scene themselves to try and restore order, but to no avail. Chief Sherwood actually attempted to personally arrest a rioter and got beat up for his efforts. The mayor allegedly grabbed an axe from a dude who was about to commit coulrocide. Yes, that is the academic term for "clown murder."


This ad seems to imply the circus had tigers. TIGERS. Why didn't they unleash their tigers on the rowdy Irishmen???

Finally the mayor had to call in the army to put the riot down. Amazingly no one was killed. Several locals were hurt but I can't find records of what sort of injuries were suffered among the circus folk. Something tells me the carnies wouldn't have cooperated with the police even if they had bothered to question them, and the circus quickly fled town. Many of them actually jumped into the lake and swam away.


I would like to imagine that Lake Ontario wasn't as disgusting back then, but somehow I doubt it.

Afterward, seventeen rioters were arraigned in court but the police present at the scene claimed they were unable to identify even a single participant in the riot. This came as a surprise to no one, as they acted similarly during the previous firemen's brawl as well as the ongoing Protestant-Catholic street fights. Police constables of the day were appointed by city councilors with no training or vetting processes, and were, to be polite, massively corrupt bastards.


The public and the press put heavy pressure on the local government to fix the much-maligned police department. In 1858 the province finally put down legislation for an overhaul of the police force, and in 1859 the entire force was fired, leading to the basis of a new, better and less corrupt police organization in Toronto that exists to this today.

I can hear you snickering about a "better" and "less corrupt" police force in Toronto today, but compared to where it was in 1855, it's miles ahead.