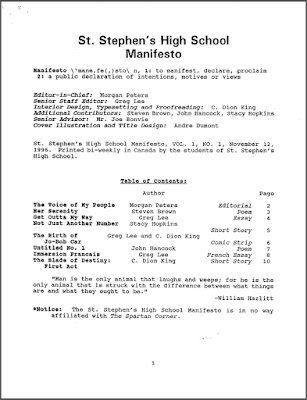 Last month I told a story about how I made my first money as a writer by ripping off my high school literary magazine. It was a low point in my academic and literary career, trust me. Thinking about the story made me go back and dig up my old copies of said magazine, which sent me hurtling on a trip down memory lane.

Today, I'm going to take you along with me on that trip. Buckle in.

First to set the stage: St. Stephen's High School was a Catholic high school in the town of Stephenville, Newfoundland. I was actually a member of the last graduating class before it switched to the public school system in 1998 and was renamed simply Stephenville High.

The school was mostly known for its sports teams and bands (the organized, orchestral kind). Other arts, literature and drama were deemed far less important activities - the concert band and the school drama club actually had an ongoing feud for a couple of years that I may have to write about some day. There was actually a reference to the school prizing Math and Science above Arts and Literature in the lead Editorial of this very issue, which was kind of the impetus for starting this magazine in the first place.

I should also point out that, despite the environment, there was not one but TWO student publications circulating the school halls in 1996-97, which explains the context of this little note on the bottom of page one:

The Spartan Corner was our "official" school newspaper which had a lot more teacher involvement and was tailored more to material that the administration wanted the students to hear about. So, basically government media manipulation.

We balked against that and started our own paper where we could say whatever we wanted. This caused some minor controversies in later issues, but they were just that, very minor. The most controversial things in our debut issue was our lead essayist (the illustrious Mr Lee) complaining about people getting in his way in the hall:

Actually that's a lie, the most controversial thing in the issue was probably hidden in the French essay (coincidentally also by Mr. Lee). On the surface it was an examination of how French Immersion was treated poorly in our school system and at risk of dying out, specifically referencing the falling numbers of students in the program every year. However, there was also a couple of digs at the quality and qualifications of the English teachers in the school, which - since they probably couldn't read French - they likely didn't pick up on. A crafty guy that Mr. Lee. Probably explains why he didn't make Valedictorian, despite having the top grades as well as taking part in lots of sports and other intramural activities: somebody must have translated the essay for the principal.

You will notice that I only have scans of the interior text pages; unfortunately I'm missing the cover and the comic strip. If I recall correctly, the body of the magazine and the artwork pages were printed separately and then collated together - I suspect this is a copy that was left over after we ran out of the art pages. While do I miss the cover, I don't mind not having the comic. I drew it and it was spectacularly bad. You'll see what I'm talking about when I get to Issue #2.

That being said, if anyone who attended St. Stephen's High School in 1996 and has a copy of the cover or comic PLEASE scan it and send me a copy. I will be your best friend forever.

I would amiss if I didn't take a moment to comment on the absolutely atrocious formatting. I remember vividly the first issue being messed up; I had given the files to someone else to print and they printed like 50 copies without noticing that the font was wrong, the pages had all shifted and the page numbers were screwed up. I was so pissed that I took Draconian hold over the layout and wouldn't let anyone else touch the set up or printing for any of the future issues. It's a bit of a obsessive control streak I maintain to this day, and may have something to do with my choice to self-publish.

I guess I can't get away with talking about this issue without talking about the story I contributed to it. The Blade of Destiny: First Act is the first chapter of a serialized short novel/long story I had intended to publish in each issue of The Manifesto. It was supposed to be six parts but I think I only got through four during the Manifesto's run. It's about a poor young peasant boy who never knew his father and has strange dreams of a magic sword. In this part he meets a mysterious figure who says he has to claim the sword and face his fears in the dream in order to reclaim his destiny. He does of course, and somehow pulls the sword out of the dream along with him.

It's... not terrible. It's not good, either, but it's perfectly perfunctory. The prose is kind of awkward and definitely too wordy (twenty fucking years later and I'm still dealing with that), not to mention I used every single possible lazy fantasy trope I could think of (the sword is embedded in a stone, for crying out loud). It was also surprisingly dark. The boy's mother is a depressed drug addict and he discovers over the course of this chapter that's he's cursed because his father was a coward who abandoned his family. It's kind of depressing. This was during a time when I took my writing and my fantasy way too seriously, before I found that you can (and should) find humour in everything, even (and especially) tragedy.


Hopefully you didn't mind my little trip down memory lane. If you're interested in checking out my more recent (and slightly better) writing, my first book Ten Thousand Days is now available at Amazon and many other booksellers worldwide. I'm also in the middle of crowdfunding a new book at Inkshares.com. Head over there to check it out.
Posted by C.D. Gallant-King at 5:30 AM
Email ThisBlogThis!Share to TwitterShare to FacebookShare to Pinterest
Labels: #MondayBlogs, French, Manifesto, Music, Newfoundland, School