Interview with Jay Lockwood, Author of "A Beast Requires" 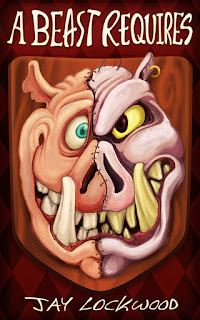 When conspiracies threaten to plunge Aurum into civil war, the city's only hope is Deputy Constable Albicon Pine. Unfortunately, it’s his first week on the job.

You're heard it many times, but I'm currently taking part in a contest on Inkshares.com in an attempt to win a publishing deal for my book. You may be surprised that mine is not the only book in the contest (there's about 325 more, to be precise). You should not be surprised that many of those other books are very, very good.

A Beast Requires by Jay Lockwood is one of those books that looks incredibly promising. It's a comic fantasy and judging by the excerpts posted so far, it looks to be right up my alley.

The book looks so good that I decided to ask the author to stop by to tell us a little more about himself and how he wrote the book.

What is your favourite genre? I’ve been a fantasy nerd ever since I received a used copy of The Hobbit in second grade. I loved mythology and history, wanting to be Merlin or Friar Tuck when I grew up rather than anything realistic or sensible. I did go through a phase where I wanted to be Calico Jack, and by phase I mean most of the 90’s. I was a miserable kid. Being grounded all the time limited my choices of escapism. Fantasy hit me like a ten pound sword, taking me to where the dragons roamed. Fantasy got me through some dark times, and saved my life on more than one occasion.

Is there any genre you won't write? I’m a comedic mashup writer. I love smooshing together genres to create something interesting, or if that fails, amusing. I don’t think I’ll ever write a standalone genre novel. My attention span isn’t there for it, so I’m more likely to write a post-apocalyptic horror romance western than straight up sci-fi. That could change down the line, but for now I’m sticking with my comedic mashups.

Do you have any odd writing habits? I have dreadful anxiety, so I live in a world overrun with ritual. Before I sit down to write, I blast a song that embodies the tone I’m attempting to set. I close my eyes and listen, letting the characters run around my imagination and dance. While writing A Beast Requires, there was a lot of folk punk. I also utilize aromas to get myself in the right headspace. Smell is a powerful trigger, and I go through scented candles and incense like crazy.

At what point in writing a book do you have the most fun? While it is aggravating to get there, I have the most fun when I’m diving into the third draft with reckless abandon. I’m adding jokes and scenes that crack me up, loving every strange and wonderful detail before I cut them all in draft four.

Do you have conversations with your characters? Well, yea, in a roundabout sort of way. I have conversations with my characters as other characters. The majority of my dialogue is formed this way, usually while in the shower or doing dishes. There is a cadence to language, a hidden rhythm when we’re excited or screaming against the wind. It’s why some dialogue lives on well past the lifespan of the character. Also, accents are fun. And, yes, even the terrible ones.

If you could have dinner with one character from your book, who would it be? I’d invite C.C. Rilley from A Beast Requires without hesitation. He’s a deputy with the constabulary, and their resident wizard and alchemist. He’s a total nerd and specializes in forensic gastronomy. Dinner conversation would be fast moving and covering a range of topics as we each talk over each other with flailing hands and excited tones. Plus he’s cute, and there may be breakfast the following morning.

If you could have dinner with one character from someone else's book, who would it be? I’d have to say Archie Goodwin from Rex Stout’s Nero Wolfe novels. It’s all about the conversation, and he is a fellow Ohioan. He’s lived an interesting life, including working for Nero Wolfe, and loves poker and dancing. He’s bring along Fritz to cook, and having one of the top chefs in the world fix dinner is an opportunity you don’t pass up. Having Timothy Hutton as my mental image of him doesn’t hurt either. The man is dreamy. There is also the potential for breakfast.

Do you ever cast your characters with Hollywood actors? Not until I’m well into the second draft. Characters begin as a fluctuating mass of concepts and ideas that change as I progress. I keep a running tally of things they do and situational responses throughout the first draft, seeing where there personality interacts with the story. That’s when they really begin to take shape, and as they form, that’s when their mental image is cast. There is one exception involving Nathan Fillion, but isn’t he always the exception?

Describe yourself in three words: Always Be Gnoming

When conspiracies threaten to plunge Aurum into civil war, the city's only hope is Deputy Constable Albicon Pine. Unfortunately, it’s his first week on the job.

A comedy with a body count, A BEAST REQUIRES has a bit of everything: riots, royal plots, forensic gastronomy, interspecies politics, and a collection of historically significant chamberpots. 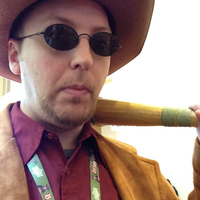 JAY LOCKWOOD battles word counts alongside D20's and dragons. He lives in Kent, Ohio, and is owned by three cats.