Revenge of the Spiff and Other Stories (#IWSG August 2018)

Lots of news this month! Some insecurity, some head-scratchers, and even some good news. There's so much to talk about that I've had to break it down into easily-digestible categories... 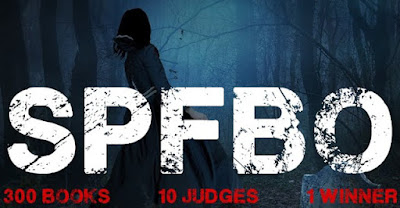 Remember last year when I signed up for the Self-Published Fantasy Blog-Off? Quick recap: It's a contest organized by award-winning and best-selling author Mark Lawrence, where 300 independent writers submit their books to be judged by 10 book review websites to find "the best" self-published fantasy book of the year. While there's no "official" prize (besides a replica of Dumbledore's Elder Wand - it's a long story), the exposure of doing well in this high-profile event does wonders for you and your book. Previous winners have gone on to big things, and even making it as a finalist can provide a huge boost to your sales and audience.

Of course, Ten Thousand Days was the very first book eliminated in its group when the reviewer was offended by some off-colour jokes and didn't make it past the first chapter.

Well, I didn't learn my lesson, because I have submitted Hell Comes to Hogtown to SPFBO this year, which has TEN TIMES as much offensive humour as Ten Thousand Days. My thought was I can't possibly do any worse than last year, so what do I have to lose? 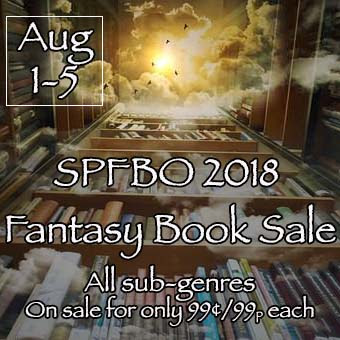 The SPFBO contest officially starts today, so reviews should start to roll in soon. You can start taking bets on how quickly I'll be booted out this time around. In conjunction with the contest though, I'm also taking part in a special sale, where over 100 of the SPFBO participants are offering their entry on sale for just 99 cents! That's right, you can check out exactly how funny, gory and inappropriate Hell Comes to Hogtown is FOR YOURSELF, all for less than the price of a cup of coffee. 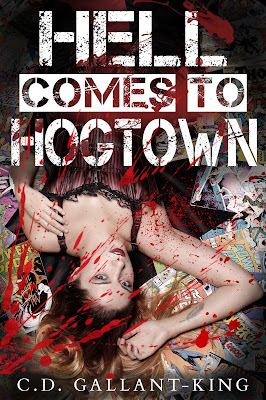 If schlocky horror-comedy is not your thing, there are many other great books participating in this promotion. There's paranormal, epic fantasy and YA fantasy as far at the eye can see! Just check out Andrea Domanski's website for a full list of all the books on sale this week. Special thanks to Ms Domanski for organizing the sale, too!


CHECK OUT ALL THE BOOKS ON SALE

Just for fun, I also made Tentacles Under a Full Moon FREE on Amazon this week, too, so check that out if you haven't already.

A few weeks ago I finally started writing a story that I've been putting off for two years. It's not that I didn't want to write it, I just had so many things I wanted to write I couldn't decide which one to start first. I actually started - and abandoned - three other novels in that time, and wrote several short stories. Then a lot of personal and family stuff happened that wiped out my free time and made all writing pretty much impossible.

I've finally started to carve out that time and put words to (digital) paper, and in the first week or so so I wrote 5000 words. I was ecstatic! I finally got my groove back and I felt like myself. Plus I was making progress on a project that's been rolling around in my head for years. It was great, I was feeling good and positive...

...and then I realized those 5000 words sucked and I threw pretty much the whole thing out.

I was forcing the story to go places it didn't want to go. I'm notoriously bad at starting stories/books, and in this case it was because I had certain scenes and jokes in mind, but it took a lot of set-up to get there, and when I finally got to the punchline it really wasn't worth it. I tried to jam way too many characters and plot lines into the first few chapters and it just didn't work. So I trimmed it all out, jumped right into the main plot line instead, and I'll introduce those characters and plot elements more naturally over time as the story progresses.

Maybe I'll be able to use my ideas later on in the book after everything is established, maybe not, but either way I'm not upset about it. It's a learning experience and I think the book will be better for it. I'm just happy it's taking shape at all, and hey, I'm back up to about 3000 words, so I'm doing alright.

I submitted my pitch a few times during the #IWSGPIT a few weeks ago on Twitter and got a couple of bites. One agent wrote me back and told me the sample I sent was hilarious, but it really wasn't the kind of thing she represented so had to pass. I had thought the same thing when I looked her up before submitting the query, but hey, it's still nice to know someone liked it.

I can't share it yet, but let me just say it made my day (and month, maybe year?) writing-wise when I heard this bit of news a few weeks ago. No, I didn't land a book deal or anything, but man, I really felt vindicated when I got this particular message. I'll share the details when I can (hopefully in time for next month's IWSG), but until then just know that this info is what triggered my recent resurgence in writing, so it's definitely a good thing.

AUGUST 1st BONUS QUESTION
What pitfalls would you warn other writers to avoid on their publication journey?

Don't wait. I wish I had started doing what I'm doing now at least 10 years earlier. Sure, I'm a better writer now, but I truly believe if I had started publishing when I was 25 instead of 35 I would have gotten better faster, too.

If you're looking to be traditionally published, submit. Submit, submit, submit. Submit anything. Pitches, short stories, full novels, grocery lists, whatever you have. What's the worst thing that can happen? They say "no?" They're going to say "no" 99% of the time anyway, so you might as well start building up a tolerance to it. Let it become a routine. Submit, get rejected, submit somewhere else. You'll start to write more stuff because you'll want to try again. Or maybe you'll re-write and start over. Eventually SOMETHING will get accepted, and you will get better as you go.

If you want to be self-published, just do it. If you're afraid it will suck or you don't know what you're doing, you're probably right. Publish it anyway. Use a pseudonym, if you feel you need to protect your name. Start with just a short story, if you like. It will be full of typos, the cover will be terrible, the formatting will be all screwed up and no one will read it or buy it. You will take it down and re-write it multiple times. But much like with submitting to a market, the first time is always the hardest and scariest. The experience you will gain self-publishing your first story will be invaluable, and everything will make much more sense the next time around. And again, you will want to put out something bigger and better than last time, and use what you've learned to help you along, so you will only improve as a writer each time.

The first Wednesday of every month is officially Insecure Writer’s Support Group day. Writers post their thoughts on their blogs, talking about their doubts and the fears they have conquered. It's a chance for writers to commiserate and offer a word of encouragement to each other. Check out the group at http://www.insecurewriterssupportgroup.com/.
Posted by C.D. Gallant-King at 12:30 AM
Email ThisBlogThis!Share to TwitterShare to FacebookShare to Pinterest
Labels: Hell Comes to Hogtown, Insecure Writer's Support Group, IWSG, Sale, Self-Publishing, SPFBO