#MyFirstPostRevisited was created by Sarah Brentyn at Lemon Shark, and I was tagged to participate (after some prompting) by Loni Townsend. It's an excuse to share your very first (hopefully terrible) blog post.

I wrote my first blog post six years ago. It wasn't at this blog, it was at a gaming blog called "Rule of the Dice" that I still write for occasionally. An acquaintance of mine was bumping up his game-related content and recruited a bunch of gamers to write for his site.

The post is not as embarrassing as you're probably hoping. I actually did write some REALLY embarrassing and obnoxious posts over there, but I'm not sharing those today. This was just an intro to me and my first time playing Dungeons & Dragons. Appropriately, this year is the 25th anniversary of me getting into role-playing games. This is amazing for two reasons:

1. I have wasted SO many hours playing those games over the years.
2. I am getting really f*cking old. 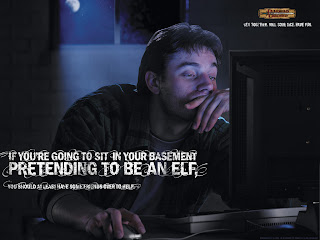 It was the summer of 1992. Super Nintendo was still all the rage, and Final Fantasy II was my favourite game (still is, actually). A bunch of artists from Marvel comics started their own upstart comic company, Image, which featured lousy stories but very pretty pictures. Batman Returns was in the theatres, though it was actually Basic Instinct that my 12-year old self wanted to see. Of course, being 12-years old, I couldn't get in.1 I was about to go into Junior High, an awkward, pimply, unpopular kid with ugly glasses (why parents let their children wear ugly glasses, I will never know), and spent my afternoons hanging out on my friend's patio.

One day, one of my friends (I can't remember if it was Carl or Chris) pulled out these green-lined character sheets covered with arcane runes like "THAC0," "Bend bars/lift gates," "Constitution" and "Save versus Death." The Advanced Dungeons & Dragons logo was featured at the top. I had heard of D&D but really had no idea what it was. "It's like Final Fantasy, but you can make whatever kind of character you want," they explained to me. "Then you make up stories and adventures and stuff for them to go on."

My 12-year old mind was blown. I immediately made a character, which I remember vividly (I think his name was Arik). He had 20 Strength, 20 Constitution, 20 Dexterity, 5 Intelligence, 5 Wisdom and 15 Charisma. He had 600 hit points (we all started with 600 hit points) and had a Sword of Elements, which could attack with whatever type of damage was appropriate at the time.

We obviously had no idea what we were doing. We had no rule book, no dice, very little idea of how the game worked besides a few hours one of the other guys had played with some older kids. All he had were those ugly green character record sheets. And we loved it. 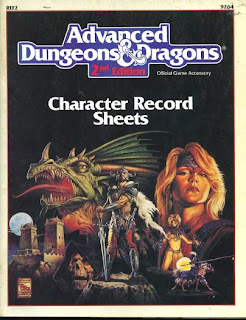 DM: You meet an ogre.

Player: I hit it with my katana of destiny.

DM: How much damage do you do?

DM: It's dead. You find a potion, but it's not labeled.

Player: I taste it, does anything happen?

DM: It was poison. You die.

We played that for awhile, and then tried Marvel Superheroes, which was even more fun. You could make your own superhero? With whatever ridiculous powers you wanted? And I can beat-up Spider-Man??? Once again, we neglected to read the rule book, so that made it even better. It wasn't until Christmas that year when I got the D&D Basic Boxed set, and I sat down and realized that role-playing games actually had RULES. So many things suddenly made sense now, like: "Oh, so Turn Undead doesn't actually mean you transform into a zombie!" The box also came with a set of ugly polyhedral dice. I still have them, and though they really suck (I usually don't believe in luck affecting the probability of dice, but that stupid twenty-sider can't roll a 20 to save its goddam life), they hold a special place in my heart.

I'm now approaching 19 years playing table-top RPGs. Have I learned anything interesting or useful enough that people will want to read what I have to say? Probably not, but I still hope I can sufficiently minimize the suck so you'll stop by from time to time to read my ramblings. While you're here, leave a comment while you're at it. Tell us all about your first time.2

Join me next week when I'll tell you about the greatest RPG ever.


1 Which was probably for the best - even when I saw that movie years later, it still made no sense to me.

2 Yes, I mean first time-time playing D&D. But if you want to tell me about other firsts, that's okay, too.

Some things of note: I love foot notes, and used to use them extensively in my writing, but they really don't work very well digitally. No one wants to scroll down to the bottom in a blog post, and setting them up in an ebook is even worse. So sadly I don't use them much anymore.

I wrote lots more about roleplaying games on Rule of the Dice until I ran out of old stories, and had kids so I didn't have much time to create new ones. Then I started releasing my fiction and writing this blog, which I don't really have time for either but at least I can do it by myself, without having to schedule game days with other people.

If anyone wants to participate in the hop, the rules are below:


Here are the folks I'm tagging to participate, if you're feeling up to it: